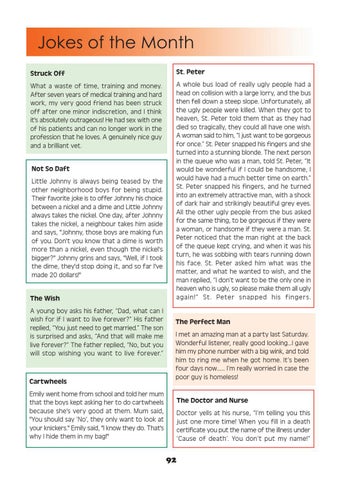 Jokes of the Month Struck Off

What a waste of time, training and money. After seven years of medical training and hard work, my very good friend has been struck off after one minor indiscretion, and I think it&#39;s absolutely outrageous! He had sex with one of his patients and can no longer work in the profession that he loves. A genuinely nice guy and a brilliant vet.

A whole bus load of really ugly people had a head on collision with a large lorry, and the bus then fell down a steep slope. Unfortunately, all the ugly people were killed. When they got to heaven, St. Peter told them that as they had died so tragically, they could all have one wish. A woman said to him, “I just want to be gorgeous for once.” St. Peter snapped his fingers and she turned into a stunning blonde. The next person in the queue who was a man, told St. Peter, “It would be wonderful if I could be handsome, I would have had a much better time on earth.” St. Peter snapped his fingers, and he turned into an extremely attractive man, with a shock of dark hair and strikingly beautiful grey eyes. All the other ugly people from the bus asked for the same thing, to be gorgeous if they were a woman, or handsome if they were a man. St. Peter noticed that the man right at the back of the queue kept crying, and when it was his turn, he was sobbing with tears running down his face. St. Peter asked him what was the matter, and what he wanted to wish, and the man replied, “I don’t want to be the only one in heaven who is ugly, so please make them all ugly again!” St. Peter snapped his fingers.

Not So Daft Little Johnny is always being teased by the other neighborhood boys for being stupid. Their favorite joke is to offer Johnny his choice between a nickel and a dime and Little Johnny always takes the nickel. One day, after Johnny takes the nickel, a neighbour takes him aside and says, &quot;Johnny, those boys are making fun of you. Don&#39;t you know that a dime is worth more than a nickel, even though the nickel&#39;s bigger?&quot; Johnny grins and says, &quot;Well, if I took the dime, they&#39;d stop doing it, and so far I&#39;ve made 20 dollars!&quot; The Wish A young boy asks his father, “Dad, what can I wish for if I want to live forever?” His father replied, “You just need to get married.” The son is surprised and asks, “And that will make me live forever?” The father replied, “No, but you will stop wishing you want to live forever.”

The Perfect Man I met an amazing man at a party last Saturday. Wonderful listener, really good looking…I gave him my phone number with a big wink, and told him to ring me when he got home. It’s been four days now…… I’m really worried in case the poor guy is homeless!

Emily went home from school and told her mum that the boys kept asking her to do cartwheels because she&#39;s very good at them. Mum said, &quot;You should say ‘No’, they only want to look at your knickers.&quot; Emily said, &quot;I know they do. That&#39;s why I hide them in my bag!&quot;

The Doctor and Nurse Doctor yells at his nurse, “I’m telling you this just one more time! When you fill in a death certificate you put the name of the illness under ‘Cause of death’. You don’t put my name!”