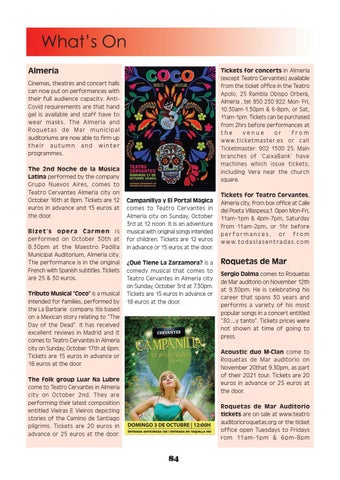 Tickets for concerts in Almería (except Teatro Cervantes) available from the ticket office in the Teatro Apolo, 25 Rambla Obispo Orberá, Almería , tel: 950 230 922. Mon- Fri, 10.30am-1.30pm &amp; 6-8pm, or Sat, 11am-1pm. Tickets can be purchased from 2hrs before performances at the venue or from www.ticketmaster.es or call Ticketmaster: 902 1500 25. Main branches of ‘CaixaBank’ have machines which issue tickets; including Vera near the church square.

Cinemas, theatres and concert halls can now put on performances with their full audience capacity. AntiCovid requirements are that hand gel is available and staff have to wear masks. The Almería and Roquetas de Mar municipal auditoriums are now able to firm up their autumn and winter programmes. The 2nd Noche de la Música Latína performed by the company Grupo Nuevos Aires, comes to Teatro Cervantes Almería city on October 16th at 8pm. Tickets are 12 euros in advance and 15 euros at the door. Bizet’s opera Carmen is performed on October 30th at 8.30pm at the Maestro Padilla Municipal Auditorium, Almería city. The performance is in the original French with Spanish subtitles. Tickets are 25 &amp; 30 euros. Tributo Musical “Coco” is a musical intended for families, performed by the La Barbarie company. Itis based on a Mexican story relating to “The Day of the Dead”. It has received excellent reviews in Madrid and it comes to Teatro Cervantes in Almería city on Sunday, October 17th at 6pm. Tickets are 15 euros in advance or 18 euros at the door.

The folk group Luar Na Lubre come to Teatro Cervantes in Almería city on October 2nd. They are performing their latest composition entitled Vieiras E Vieiros depicting stories of the Camino de Santiago pilgrims. Tickets are 20 euros in advance or 25 euros at the door.