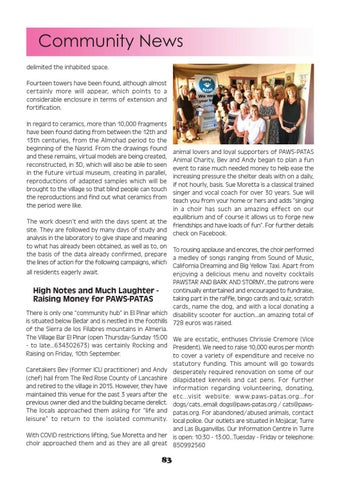 Community News delimited the inhabited space. Fourteen towers have been found, although almost certainly more will appear, which points to a considerable enclosure in terms of extension and fortification. In regard to ceramics, more than 10,000 fragments have been found dating from between the 12th and 13th centuries, from the Almohad period to the beginning of the Nasrid. From the drawings found and these remains, virtual models are being created, reconstructed, in 3D, which will also be able to seen in the future virtual museum, creating in parallel, reproductions of adapted samples which will be brought to the village so that blind people can touch the reproductions and find out what ceramics from the period were like.

animal lovers and loyal supporters of PAWS-PATAS Animal Charity, Bev and Andy began to plan a fun event to raise much needed money to help ease the increasing pressure the shelter deals with on a daily, if not hourly, basis. Sue Moretta is a classical trained singer and vocal coach for over 30 years. Sue will teach you from your home or hers and adds “singing in a choir has such an amazing effect on our equilibrium and of course it allows us to forge new The work doesn’t end with the days spent at the friendships and have loads of fun”. For further details site. They are followed by many days of study and check on Facebook. analysis in the laboratory to give shape and meaning to what has already been obtained, as well as to, on To rousing applause and encores, the choir performed the basis of the data already confirmed, prepare a medley of songs ranging from Sound of Music, the lines of action for the following campaigns, which California Dreaming and Big Yellow Taxi. Apart from all residents eagerly await. enjoying a delicious menu and novelty cocktails PAWSTAR AND BARK AND STORMY...the patrons were continually entertained and encouraged to fundraise, High Notes and Much Laughter taking part in the raffle, bingo cards and quiz, scratch Raising Money for PAWS-PATAS cards, name the dog, and with a local donating a There is only one “community hub” in El Pinar which disability scooter for auction...an amazing total of is situated below Bedar and is nestled in the foothills 728 euros was raised. of the Sierra de los Filabres mountains in Almeria. The Village Bar El Pinar (open Thursday-Sunday 15:00 We are ecstatic, enthuses Chrissie Cremore (Vice - to late...634302673) was certainly Rocking and President). We need to raise 10,000 euros per month Raising on Friday, 10th September. to cover a variety of expenditure and receive no statutory funding. This amount will go towards desperately required renovation on some of our dilapidated kennels and cat pens. For further information regarding volunteering, donating, Photo by Lesley Posso etc...visit website: www.paws-patas.org...for dogs/cats...email: dogs@paws-patas.org / cats@pawspatas.org. For abandoned/abused animals, contact local police. Our outlets are situated in Mojácar, Turre and Las Buganvillas. Our Information Centre in Turre With COVID restrictions lifting, Sue Moretta and her is open: 10:30 - 13:00...Tuesday - Friday or telephone: Photo byare Aaron choir approached them and as they allBaglietto great 850992560 Caretakers Bev (former ICU practitioner) and Andy (chef) hail from The Red Rose County of Lancashire and retired to the village in 2015. However, they have maintained this venue for the past 3 years after the previous owner died and the building became derelict. The locals approached them asking for “life and leisure” to return to the isolated community.