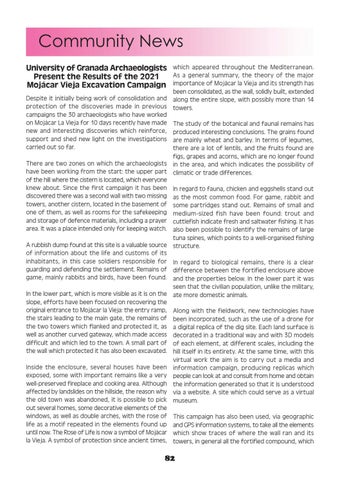 Community News which appeared throughout the Mediterranean. As a general summary, the theory of the major importance of Mojácar la Vieja and its strength has been consolidated, as the wall, solidly built, extended Despite it initially being work of consolidation and along the entire slope, with possibly more than 14 protection of the discoveries made in previous towers. campaigns the 30 archaeologists who have worked on Mojácar La Vieja for 10 days recently have made The study of the botanical and faunal remains has new and interesting discoveries which reinforce, produced interesting conclusions. The grains found support and shed new light on the investigations are mainly wheat and barley. In terms of legumes, carried out so far. there are a lot of lentils, and the fruits found are figs, grapes and acorns, which are no longer found There are two zones on which the archaeologists in the area, and which indicates the possibility of have been working from the start: the upper part climatic or trade differences. of the hill where the cistern is located, which everyone knew about. Since the first campaign it has been In regard to fauna, chicken and eggshells stand out discovered there was a second wall with two missing as the most common food. For game, rabbit and towers, another cistern, located in the basement of some partridges stand out. Remains of small and one of them, as well as rooms for the safekeeping medium-sized fish have been found: trout and and storage of defence materials, including a prayer cuttlefish indicate fresh and saltwater fishing. It has area. It was a place intended only for keeping watch. also been possible to identify the remains of large tuna spines, which points to a well-organised fishing A rubbish dump found at this site is a valuable source structure. of information about the life and customs of its inhabitants, in this case soldiers responsible for In regard to biological remains, there is a clear guarding and defending the settlement. Remains of difference between the fortified enclosure above game, mainly rabbits and birds, have been found. and the properties below. In the lower part it was seen that the civilian population, unlike the military, In the lower part, which is more visible as it is on the ate more domestic animals. slope, efforts have been focused on recovering the original entrance to Mojácar la Vieja: the entry ramp, Along with the fieldwork, new technologies have the stairs leading to the main gate, the remains of been incorporated, such as the use of a drone for the two towers which flanked and protected it, as a digital replica of the dig site. Each land surface is well as another curved gateway, which made access decorated in a traditional way and with 3D models difficult and which led to the town. A small part of of each element, at different scales, including the the wall which protected it has also been excavated. hill itself in its entirety. At the same time, with this virtual work the aim is to carry out a media and Inside the enclosure, several houses have been information campaign, producing replicas which exposed, some with important remains like a very people can look at and consult from home and obtain well-preserved fireplace and cooking area. Although the information generated so that it is understood affected by landslides on the hillside, the reason why via a website. A site which could serve as a virtual the old town was abandoned, it is possible to pick museum. out several homes, some decorative elements of the windows, as well as double arches, with the rose of This campaign has also been used, via geographic life as a motif repeated in the elements found up and GPS information systems, to take all the elements until now. The Rose of Life is now a symbol of Mojácar which show traces of where the wall ran and its la Vieja. A symbol of protection since ancient times, towers, in general all the fortified compound, which