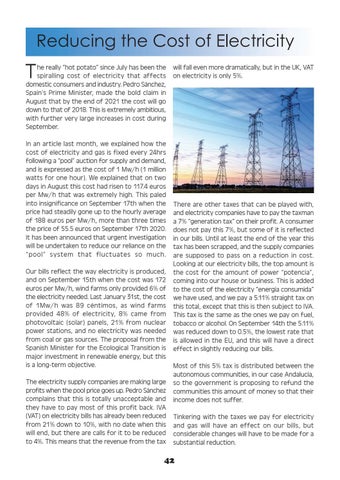 Reducing the Cost of Electricity

he really “hot potato” since July has been the will fall even more dramatically, but in the UK, VAT spiralling cost of electricity that affects on electricity is only 5%. domestic consumers and industry. Pedro Sánchez, Spain’s Prime Minister, made the bold claim in August that by the end of 2021 the cost will go down to that of 2018. This is extremely ambitious, with further very large increases in cost during September. In an article last month, we explained how the cost of electricity and gas is fixed every 24hrs following a “pool” auction for supply and demand, and is expressed as the cost of 1 Mw/h (1 million watts for one hour). We explained that on two days in August this cost had risen to 117.4 euros per Mw/h that was extremely high. This paled into insignificance on September 17th when the price had steadily gone up to the hourly average of 188 euros per Mw/h, more than three times the price of 55.5 euros on September 17th 2020. It has been announced that urgent investigation will be undertaken to reduce our reliance on the “pool” system that fluctuates so much. Our bills reflect the way electricity is produced, and on September 15th when the cost was 172 euros per Mw/h, wind farms only provided 6% of the electricity needed. Last January 31st, the cost of 1Mw/h was 89 céntimos, as wind farms provided 48% of electricity, 8% came from photovoltaic (solar) panels, 21% from nuclear power stations, and no electricity was needed from coal or gas sources. The proposal from the Spanish Minister for the Ecological Transition is major investment in renewable energy, but this is a long-term objective. The electricity supply companies are making large profits when the pool price goes up. Pedro Sánchez complains that this is totally unacceptable and they have to pay most of this profit back. IVA (VAT) on electricity bills has already been reduced from 21% down to 10%, with no date when this will end, but there are calls for it to be reduced to 4%. This means that the revenue from the tax

There are other taxes that can be played with, and electricity companies have to pay the taxman a 7% “generation tax” on their profit. A consumer does not pay this 7%, but some of it is reflected in our bills. Until at least the end of the year this tax has been scrapped, and the supply companies are supposed to pass on a reduction in cost. Looking at our electricity bills, the top amount is the cost for the amount of power “potencia”, coming into our house or business. This is added to the cost of the electricity “energía consumida” we have used, and we pay a 5.11% straight tax on this total, except that this is then subject to IVA. This tax is the same as the ones we pay on fuel, tobacco or alcohol. On September 14th the 5.11% was reduced down to 0.5%, the lowest rate that is allowed in the EU, and this will have a direct effect in slightly reducing our bills. Most of this 5% tax is distributed between the autonomous communities, in our case Andalucía, so the government is proposing to refund the communities this amount of money so that their income does not suffer. Tinkering with the taxes we pay for electricity and gas will have an effect on our bills, but considerable changes will have to be made for a substantial reduction.