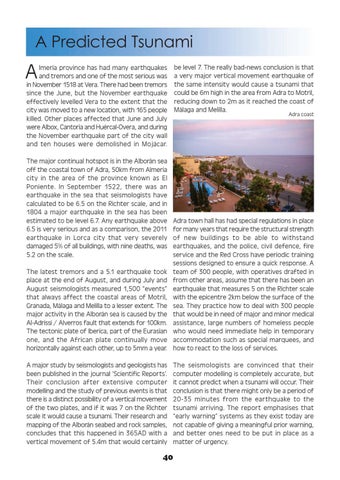 be level 7. The really bad-news conclusion is that a very major vertical movement earthquake of the same intensity would cause a tsunami that could be 6m high in the area from Adra to Motril, reducing down to 2m as it reached the coast of Málaga and Melilla.

lmería province has had many earthquakes and tremors and one of the most serious was in November 1518 at Vera. There had been tremors since the June, but the November earthquake effectively levelled Vera to the extent that the city was moved to a new location, with 165 people killed. Other places affected that June and July were Albox, Cantoria and Huércal-Overa, and during the November earthquake part of the city wall and ten houses were demolished in Mojácar. The major continual hotspot is in the Alborán sea off the coastal town of Adra, 50km from Almería city in the area of the province known as El Poniente. In September 1522, there was an earthquake in the sea that seismologists have calculated to be 6.5 on the Richter scale, and in 1804 a major earthquake in the sea has been estimated to be level 6.7. Any earthquake above 6.5 is very serious and as a comparison, the 2011 earthquake in Lorca city that very severely damaged 5% of all buildings, with nine deaths, was 5.2 on the scale.

The latest tremors and a 5.1 earthquake took place at the end of August, and during July and August seismologists measured 1,500 “events” that always affect the coastal areas of Motril, Granada, Málaga and Melilla to a lesser extent. The major activity in the Alborán sea is caused by the Al-Adrissi / Alverros fault that extends for 100km. The tectonic plate of Iberíca, part of the Eurasian one, and the African plate continually move horizontally against each other, up to 5mm a year.

Adra town hall has had special regulations in place for many years that require the structural strength of new buildings to be able to withstand earthquakes, and the police, civil defence, fire service and the Red Cross have periodic training sessions designed to ensure a quick response. A team of 300 people, with operatives drafted in from other areas, assume that there has been an earthquake that measures 5 on the Richter scale with the epicentre 2km below the surface of the sea. They practice how to deal with 300 people that would be in need of major and minor medical assistance, large numbers of homeless people who would need immediate help in temporary accommodation such as special marquees, and how to react to the loss of services.

A major study by seismologists and geologists has been published in the journal ‘Scientific Reports’. Their conclusion after extensive computer modelling and the study of previous events is that there is a distinct possibility of a vertical movement of the two plates, and if it was 7 on the Richter scale it would cause a tsunami. Their research and mapping of the Alborán seabed and rock samples, concludes that this happened in 365AD with a vertical movement of 5.4m that would certainly

The seismologists are convinced that their computer modelling is completely accurate, but it cannot predict when a tsunami will occur. Their conclusion is that there might only be a period of 20-35 minutes from the earthquake to the tsunami arriving. The report emphasises that “early warning” systems as they exist today are not capable of giving a meaningful prior warning, and better ones need to be put in place as a matter of urgency.