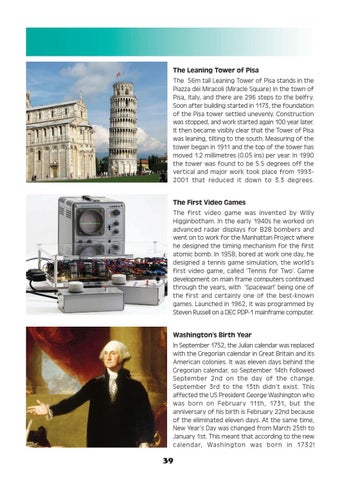 The Leaning Tower of Pisa The 56m tall Leaning Tower of Pisa stands in the Piazza dei Miracoli (Miracle Square) in the town of Pisa, Italy, and there are 296 steps to the belfry. Soon after building started in 1173, the foundation of the Pisa tower settled unevenly. Construction was stopped, and work started again 100 year later. It then became visibly clear that the Tower of Pisa was leaning, tilting to the south. Measuring of the tower began in 1911 and the top of the tower has moved 1.2 millimetres (0.05 ins) per year. In 1990 the tower was found to be 5.5 degrees off the vertical and major work took place from 19932001 that reduced it down to 3.3 degrees. The First Video Games The first video game was invented by Willy Higginbotham. In the early 1940s he worked on advanced radar displays for B28 bombers and went on to work for the Manhattan Project where he designed the timing mechanism for the first atomic bomb. In 1958, bored at work one day, he designed a tennis game simulation, the world’s first video game, called ‘Tennis for Two’. Game development on main frame computers continued through the years, with ‘Spacewar!’ being one of the first and certainly one of the best-known games. Launched in 1962, it was programmed by Steven Russell on a DEC PDP-1 mainframe computer. Washington’s Birth Year In September 1752, the Julian calendar was replaced with the Gregorian calendar in Great Britain and its American colonies. It was eleven days behind the Gregorian calendar, so September 14th followed September 2nd on the day of the change. September 3rd to the 13th didn’t exist. This affected the US President George Washington who was born on February 11th, 1731, but the anniversary of his birth is February 22nd because of the eliminated eleven days. At the same time, New Year’s Day was changed from March 25th to January 1st. This meant that according to the new calendar, Washington was born in 1732!