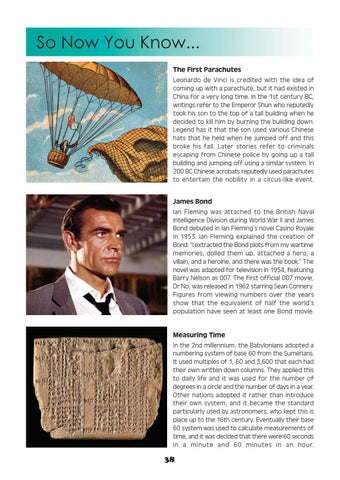 So Now You Know... The First Parachutes Leonardo de Vinci is credited with the idea of coming up with a parachute, but it had existed in China for a very long time. In the 1st century BC, writings refer to the Emperor Shun who reputedly took his son to the top of a tall building when he decided to kill him by burning the building down. Legend has it that the son used various Chinese hats that he held when he jumped off and this broke his fall. Later stories refer to criminals escaping from Chinese police by going up a tall building and jumping off using a similar system. In 200 BC Chinese acrobats reputedly used parachutes to entertain the nobility in a circus-like event. James Bond Ian Fleming was attached to the British Naval Intelligence Division during World War II and James Bond debuted in Ian Fleming’s novel Casino Royale in 1953. Ian Fleming explained the creation of Bond: “I extracted the Bond plots from my wartime memories, dolled them up, attached a hero, a villain, and a heroine, and there was the book.” The novel was adapted for television in 1954, featuring Barry Nelson as 007. The first official 007 movie, Dr No, was released in 1962 starring Sean Connery. Figures from viewing numbers over the years show that the equivalent of half the world’s population have seen at least one Bond movie. Measuring Time In the 2nd millennium, the Babylonians adopted a numbering system of base 60 from the Sumerians. It used multiples of 1, 60 and 3,600 that each had their own written down columns. They applied this to daily life and it was used for the number of degrees in a circle and the number of days in a year. Other nations adopted it rather than introduce their own system, and it became the standard particularly used by astronomers, who kept this is place up to the 16th century. Eventually their base 60 system was used to calculate measurements of time, and it was decided that there were 60 seconds in a minute and 60 minutes in an hour.