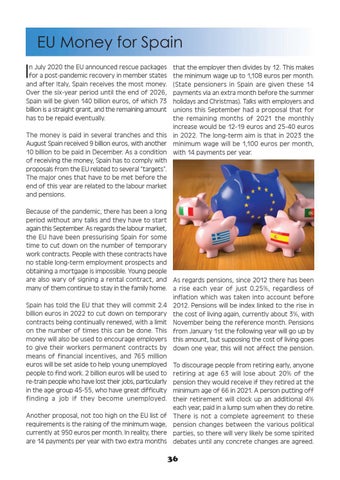 n July 2020 the EU announced rescue packages for a post-pandemic recovery in member states and after Italy, Spain receives the most money. Over the six-year period until the end of 2026, Spain will be given 140 billion euros, of which 73 billion is a straight grant, and the remaining amount has to be repaid eventually.

that the employer then divides by 12. This makes the minimum wage up to 1,108 euros per month. (State pensioners in Spain are given these 14 payments via an extra month before the summer holidays and Christmas). Talks with employers and unions this September had a proposal that for the remaining months of 2021 the monthly increase would be 12-19 euros and 25-40 euros The money is paid in several tranches and this in 2022. The long-term aim is that in 2023 the August Spain received 9 billion euros, with another minimum wage will be 1,100 euros per month, 10 billion to be paid in December. As a condition with 14 payments per year. of receiving the money, Spain has to comply with proposals from the EU related to several “targets”. The major ones that have to be met before the end of this year are related to the labour market and pensions. Because of the pandemic, there has been a long period without any talks and they have to start again this September. As regards the labour market, the EU have been pressurising Spain for some time to cut down on the number of temporary work contracts. People with these contracts have no stable long-term employment prospects and obtaining a mortgage is impossible. Young people are also wary of signing a rental contract, and As regards pensions, since 2012 there has been many of them continue to stay in the family home. a rise each year of just 0.25%, regardless of inflation which was taken into account before Spain has told the EU that they will commit 2.4 2012. Pensions will be index linked to the rise in billion euros in 2022 to cut down on temporary the cost of living again, currently about 3%, with contracts being continually renewed, with a limit November being the reference month. Pensions on the number of times this can be done. This from January 1st the following year will go up by money will also be used to encourage employers this amount, but supposing the cost of living goes to give their workers permanent contracts by down one year, this will not affect the pension. means of financial incentives, and 765 million euros will be set aside to help young unemployed To discourage people from retiring early, anyone people to find work. 2 billion euros will be used to retiring at age 63 will lose about 20% of the re-train people who have lost their jobs, particularly pension they would receive if they retired at the in the age group 45-55, who have great difficulty minimum age of 66 in 2021. A person putting off finding a job if they become unemployed. their retirement will clock up an additional 4% each year, paid in a lump sum when they do retire. Another proposal, not too high on the EU list of There is not a complete agreement to these requirements is the raising of the minimum wage, pension changes between the various political currently at 950 euros per month. In reality, there parties, so there will very likely be some spirited are 14 payments per year with two extra months debates until any concrete changes are agreed.