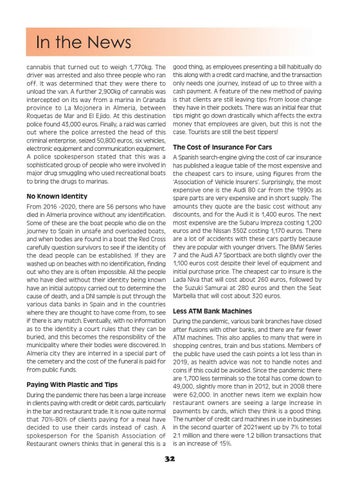 In the News cannabis that turned out to weigh 1,770kg. The driver was arrested and also three people who ran off. It was determined that they were there to unload the van. A further 2,900kg of cannabis was intercepted on its way from a marina in Granada province to La Mojonera in Almería, between Roquetas de Mar and El Ejido. At this destination police found 43,000 euros. Finally, a raid was carried out where the police arrested the head of this criminal enterprise, seized 50,800 euros, six vehicles, electronic equipment and communication equipment. A police spokesperson stated that this was a sophisticated group of people who were involved in major drug smuggling who used recreational boats to bring the drugs to marinas.

No Known Identity From 2016 -2020, there are 56 persons who have died in Almería province without any identification. Some of these are the boat people who die on the journey to Spain in unsafe and overloaded boats, and when bodies are found in a boat the Red Cross carefully question survivors to see if the identity of the dead people can be established. If they are washed up on beaches with no identification, finding out who they are is often impossible. All the people who have died without their identity being known have an initial autopsy carried out to determine the cause of death, and a DNI sample is put through the various data banks in Spain and in the countries where they are thought to have come from, to see if there is any match. Eventually, with no information as to the identity a court rules that they can be buried, and this becomes the responsibility of the municipality where their bodies were discovered. In Almería city they are interred in a special part of the cemetery and the cost of the funeral is paid for from public funds.

Paying With Plastic and Tips During the pandemic there has been a large increase in clients paying with credit or debit cards, particularly in the bar and restaurant trade. It is now quite normal that 70%-80% of clients paying for a meal have decided to use their cards instead of cash. A spokesperson for the Spanish Association of Restaurant owners thinks that in general this is a

good thing, as employees presenting a bill habitually do this along with a credit card machine, and the transaction only needs one journey, instead of up to three with a cash payment. A feature of the new method of paying is that clients are still leaving tips from loose change they have in their pockets. There was an initial fear that tips might go down drastically which affects the extra money that employees are given, but this is not the case. Tourists are still the best tippers!

The Cost of Insurance For Cars A Spanish search-engine giving the cost of car insurance has published a league table of the most expensive and the cheapest cars to insure, using figures from the ‘Association of Vehicle Insurers’. Surprisingly, the most expensive one is the Audi 80 car from the 1990s as spare parts are very expensive and in short supply. The amounts they quote are the basic cost without any discounts, and for the Audi it is 1,400 euros. The next most expensive are the Subaru Impreza costing 1,200 euros and the Nissan 350Z costing 1,170 euros. There are a lot of accidents with these cars partly because they are popular with younger drivers. The BMW Series 7 and the Audi A7 Sportback are both slightly over the 1,100 euros cost despite their level of equipment and initial purchase price. The cheapest car to insure is the Lada Niva that will cost about 260 euros, followed by the Suzuki Samurai at 280 euros and then the Seat Marbella that will cost about 320 euros.

Less ATM Bank Machines During the pandemic, various bank branches have closed after fusions with other banks, and there are far fewer ATM machines. This also applies to many that were in shopping centres, train and bus stations. Members of the public have used the cash points a lot less than in 2019, as health advice was not to handle notes and coins if this could be avoided. Since the pandemic there are 1,700 less terminals so the total has come down to 49,000, slightly more than in 2012, but in 2008 there were 62,000. In another news item we explain how restaurant owners are seeing a large increase in payments by cards, which they think is a good thing. The number of credit card machines in use in businesses in the second quarter of 2021went up by 7% to total 2.1 million and there were 1.2 billion transactions that is an increase of 15%.