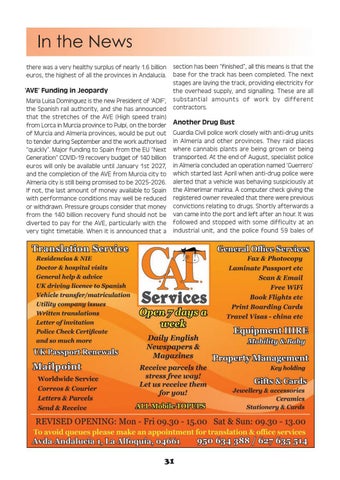 In the News there was a very healthy surplus of nearly 1.6 billion section has been “finished”, all this means is that the euros, the highest of all the provinces in Andalucía. base for the track has been completed. The next stages are laying the track, providing electricity for ‘AVE’ Funding in Jeopardy the overhead supply, and signalling. These are all María Luisa Domínguez is the new President of ‘ADIF’, substantial amounts of work by different the Spanish rail authority, and she has announced contractors. that the stretches of the AVE (High speed train) from Lorca in Murcia province to Pulpí, on the border Another Drug Bust of Murcia and Almería provinces, would be put out Guardia Civil police work closely with anti-drug units to tender during September and the work authorised in Almería and other provinces. They raid places “quickly”. Major funding to Spain from the EU “Next where cannabis plants are being grown or being Generation” COVID-19 recovery budget of 140 billion transported. At the end of August, specialist police euros will only be available until January 1st 2027, in Almería concluded an operation named ‘Guerrero’ and the completion of the AVE from Murcia city to which started last April when anti-drug police were Almería city is still being promised to be 2025-2026. alerted that a vehicle was behaving suspiciously at If not, the last amount of money available to Spain the Almerimar marina. A computer check giving the with performance conditions may well be reduced registered owner revealed that there were previous or withdrawn. Pressure groups consider that money convictions relating to drugs. Shortly afterwards a from the 140 billion recovery fund should not be van came into the port and left after an hour. It was diverted to pay for the AVE, particularly with the followed and stopped with some difficulty at an very tight timetable. When it is announced that a industrial unit, and the police found 59 bales of