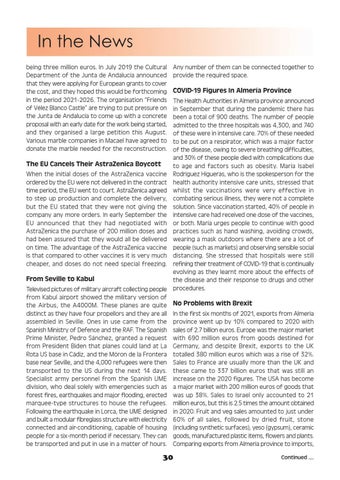 In the News being three million euros. In July 2019 the Cultural Department of the Junta de Andalucía announced that they were applying for European grants to cover the cost, and they hoped this would be forthcoming in the period 2021-2026. The organisation “Friends of Vélez Blanco Castle” are trying to put pressure on the Junta de Andalucía to come up with a concrete proposal with an early date for the work being started, and they organised a large petition this August. Various marble companies in Macael have agreed to donate the marble needed for the reconstruction.

From Seville to Kabul Televised pictures of military aircraft collecting people from Kabul airport showed the military version of the Airbus, the A4000M. These planes are quite distinct as they have four propellors and they are all assembled in Seville. Ones in use came from the Spanish Ministry of Defence and the RAF. The Spanish Prime Minister, Pedro Sánchez, granted a request from President Biden that planes could land at La Rota US base in Cádiz, and the Móron de la Frontera base near Seville, and the 4,000 refugees were then transported to the US during the next 14 days. Specialist army personnel from the Spanish UME division, who deal solely with emergencies such as forest fires, earthquakes and major flooding, erected marquee-type structures to house the refugees. Following the earthquake in Lorca, the UME designed and built a modular fibreglass structure with electricity connected and air-conditioning, capable of housing people for a six-month period if necessary. They can be transported and put in use in a matter of hours.

Any number of them can be connected together to provide the required space.

COVID-19 Figures In Almería Province The Health Authorities in Almería province announced in September that during the pandemic there has been a total of 900 deaths. The number of people admitted to the three hospitals was 4,300, and 740 of these were in intensive care. 70% of these needed to be put on a respirator, which was a major factor of the disease, owing to severe breathing difficulties, and 30% of these people died with complications due to age and factors such as obesity. María Isabel Rodríguez Higueras, who is the spokesperson for the health authority intensive care units, stressed that whilst the vaccinations were very effective in combating serious illness, they were not a complete solution. Since vaccination started, 40% of people in intensive care had received one dose of the vaccines, or both. María urges people to continue with good practices such as hand washing, avoiding crowds, wearing a mask outdoors where there are a lot of people (such as markets) and observing sensible social distancing. She stressed that hospitals were still refining their treatment of COVID-19 that is continually evolving as they learnt more about the effects of the disease and their response to drugs and other procedures.

No Problems with Brexit In the first six months of 2021, exports from Almería province went up by 10% compared to 2020 with sales of 2.7 billion euros. Europe was the major market with 690 million euros from goods destined for Germany, and despite Brexit, exports to the UK totalled 380 million euros which was a rise of 32%. Sales to France are usually more than the UK and these came to 337 billion euros that was still an increase on the 2020 figures. The USA has become a major market with 200 million euros of goods that was up 38%. Sales to Israel only accounted to 21 million euros, but this is 2.5 times the amount obtained in 2020. Fruit and veg sales amounted to just under 60% of all sales, followed by dried fruit, stone (including synthetic surfaces), yeso (gypsum), ceramic goods, manufactured plastic items, flowers and plants. Comparing exports from Almería province to imports,