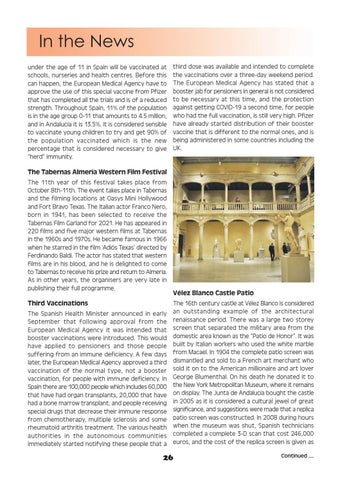 In the News under the age of 11 in Spain will be vaccinated at schools, nurseries and health centres. Before this can happen, the European Medical Agency have to approve the use of this special vaccine from Pfizer that has completed all the trials and is of a reduced strength. Throughout Spain, 11% of the population is in the age group 0-11 that amounts to 4.5 million, and in Andalucía it is 13.5%. It is considered sensible to vaccinate young children to try and get 90% of the population vaccinated which is the new percentage that is considered necessary to give “herd” immunity.

third dose was available and intended to complete the vaccinations over a three-day weekend period. The European Medical Agency has stated that a booster jab for pensioners in general is not considered to be necessary at this time, and the protection against getting COVID-19 a second time, for people who had the full vaccination, is still very high. Pfizer have already started distribution of their booster vaccine that is different to the normal ones, and is being administered in some countries including the UK.

The Tabernas Almería Western Film Festival The 11th year of this festival takes place from October 8th-11th. The event takes place in Tabernas and the filming locations at Oasys Mini Hollywood and Fort Bravo Texas. The Italian actor Franco Nero, born in 1941, has been selected to receive the Tabernas Film Garland for 2021. He has appeared in 220 films and five major western films at Tabernas in the 1960s and 1970s. He became famous in 1966 when he starred in the film ‘Adiós Texas’ directed by Ferdinando Baldi. The actor has stated that western films are in his blood, and he is delighted to come to Tabernas to receive his prize and return to Almería. As in other years, the organisers are very late in publishing their full programme.

Third Vaccinations The Spanish Health Minister announced in early September that following approval from the European Medical Agency it was intended that booster vaccinations were introduced. This would have applied to pensioners and those people suffering from an immune deficiency. A few days later, the European Medical Agency approved a third vaccination of the normal type, not a booster vaccination, for people with immune deficiency. In Spain there are 100,000 people which includes 60,000 that have had organ transplants, 20,000 that have had a bone marrow transplant, and people receiving special drugs that decrease their immune response from chemotherapy, multiple sclerosis and some rheumatoid arthritis treatment. The various health authorities in the autonomous communities immediately started notifying these people that a

Vélez Blanco Castle Patio The 16th century castle at Vélez Blanco is considered an outstanding example of the architectural renaissance period. There was a large two storey screen that separated the military area from the domestic area known as the “Patio de Honor”. It was built by Italian workers who used the white marble from Macael. In 1904 the complete patio screen was dismantled and sold to a French art merchant who sold it on to the American millionaire and art lover George Blumenthal. On his death he donated it to the New York Metropolitan Museum, where it remains on display. The Junta de Andalucía bought the castle in 2005 as it is considered a cultural jewel of great significance, and suggestions were made that a replica patio screen was constructed. In 2008 during hours when the museum was shut, Spanish technicians completed a complete 3-D scan that cost 246,000 euros, and the cost of the replica screen is given as