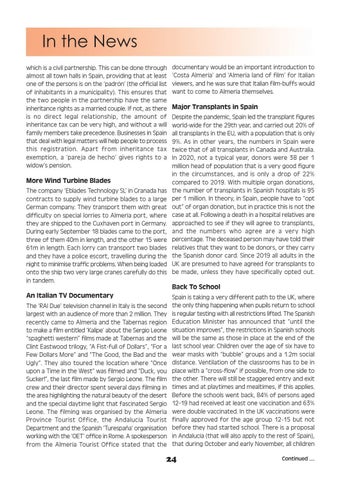 In the News which is a civil partnership. This can be done through almost all town halls in Spain, providing that at least one of the persons is on the ‘padrón’ (the official list of inhabitants in a municipality). This ensures that the two people in the partnership have the same inheritance rights as a married couple. If not, as there is no direct legal relationship, the amount of inheritance tax can be very high, and without a will family members take precedence. Businesses in Spain that deal with legal matters will help people to process this registration. Apart from inheritance tax exemption, a ‘pareja de hecho’ gives rights to a widow’s pension.

More Wind Turbine Blades The company ‘Eblades Technology SL’ in Granada has contracts to supply wind turbine blades to a large German company. They transport them with great difficulty on special lorries to Almería port, where they are shipped to the Cuxhaven port in Germany. During early September 18 blades came to the port, three of them 40m in length, and the other 15 were 61m in length. Each lorry can transport two blades and they have a police escort, travelling during the night to minimise traffic problems. When being loaded onto the ship two very large cranes carefully do this in tandem.

An Italian TV Documentary The ‘RAI Due’ television channel in Italy is the second largest with an audience of more than 2 million. They recently came to Almería and the Tabernas region to make a film entitled ‘Kalipe’ about the Sergio Leone “spaghetti western” films made at Tabernas and the Clint Eastwood trilogy, “A Fist-full of Dollars”, “For a Few Dollars More” and “The Good, the Bad and the Ugly”. They also toured the location where “Once upon a Time in the West” was filmed and “Duck, you Sucker!”, the last film made by Sergio Leone. The film crew and their director spent several days filming in the area highlighting the natural beauty of the desert and the special daytime light that fascinated Sergio Leone. The filming was organised by the Almeria Province Tourist Office, the Andalucía Tourist Department and the Spanish ‘Turespaña’ organisation working with the ‘OET’ office in Rome. A spokesperson from the Almería Tourist Office stated that the

documentary would be an important introduction to ‘Costa Almería’ and ‘Almería land of film’ for Italian viewers, and he was sure that Italian film-buffs would want to come to Almería themselves.

Major Transplants in Spain Despite the pandemic, Spain led the transplant figures world-wide for the 29th year, and carried out 20% of all transplants in the EU, with a population that is only 9%. As in other years, the numbers in Spain were twice that of all transplants in Canada and Australia. In 2020, not a typical year, donors were 38 per 1 million head of population that is a very good figure in the circumstances, and is only a drop of 22% compared to 2019. With multiple organ donations, the number of transplants in Spanish hospitals is 95 per 1 million. In theory, in Spain, people have to “opt out” of organ donation, but in practice this is not the case at all. Following a death in a hospital relatives are approached to see if they will agree to transplants, and the numbers who agree are a very high percentage. The deceased person may have told their relatives that they want to be donors, or they carry the Spanish donor card. Since 2019 all adults in the UK are presumed to have agreed for transplants to be made, unless they have specifically opted out.

Back To School Spain is taking a very different path to the UK, where the only thing happening when pupils return to school is regular testing with all restrictions lifted. The Spanish Education Minister has announced that “until the situation improves”, the restrictions in Spanish schools will be the same as those in place at the end of the last school year. Children over the age of six have to wear masks with “bubble” groups and a 1.2m social distance. Ventilation of the classrooms has to be in place with a “cross-flow” if possible, from one side to the other. There will still be staggered entry and exit times and at playtimes and mealtimes, if this applies. Before the schools went back, 84% of persons aged 12-19 had received at least one vaccination and 63% were double vaccinated. In the UK vaccinations were finally approved for the age group 12-15 but not before they had started school. There is a proposal in Andalucía (that will also apply to the rest of Spain), that during October and early November, all children