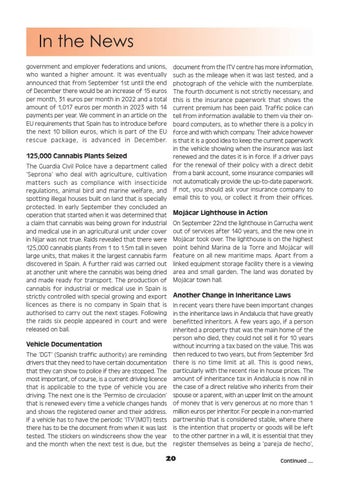 In the News government and employer federations and unions, who wanted a higher amount. It was eventually announced that from September 1st until the end of December there would be an increase of 15 euros per month, 31 euros per month in 2022 and a total amount of 1,017 euros per month in 2023 with 14 payments per year. We comment in an article on the EU requirements that Spain has to introduce before the next 10 billion euros, which is part of the EU rescue package, is advanced in December.

125,000 Cannabis Plants Seized The Guardia Civil Police have a department called ‘Seprona’ who deal with agriculture, cultivation matters such as compliance with insecticide regulations, animal bird and marine welfare, and spotting illegal houses built on land that is specially protected. In early September they concluded an operation that started when it was determined that a claim that cannabis was being grown for industrial and medical use in an agricultural unit under cover in Níjar was not true. Raids revealed that there were 125,000 cannabis plants from 1 to 1.5m tall in seven large units, that makes it the largest cannabis farm discovered in Spain. A further raid was carried out at another unit where the cannabis was being dried and made ready for transport. The production of cannabis for industrial or medical use in Spain is strictly controlled with special growing and export licences as there is no company in Spain that is authorised to carry out the next stages. Following the raids six people appeared in court and were released on bail.

Vehicle Documentation The ‘DGT’ (Spanish traffic authority) are reminding drivers that they need to have certain documentation that they can show to police if they are stopped. The most important, of course, is a current driving licence that is applicable to the type of vehicle you are driving. The next one is the ‘Permiso de circulación’ that is renewed every time a vehicle changes hands and shows the registered owner and their address. If a vehicle has to have the periodic ‘ITV’(MOT) tests there has to be the document from when it was last tested. The stickers on windscreens show the year and the month when the next test is due, but the

document from the ITV centre has more information, such as the mileage when it was last tested, and a photograph of the vehicle with the numberplate. The fourth document is not strictly necessary, and this is the insurance paperwork that shows the current premium has been paid. Traffic police can tell from information available to them via their onboard computers, as to whether there is a policy in force and with which company. Their advice however is that it is a good idea to keep the current paperwork in the vehicle showing when the insurance was last renewed and the dates it is in force. If a driver pays for the renewal of their policy with a direct debit from a bank account, some insurance companies will not automatically provide the up-to-date paperwork. If not, you should ask your insurance company to email this to you, or collect it from their offices.

Mojácar Lighthouse in Action On September 22nd the lighthouse in Garrucha went out of services after 140 years, and the new one in Mojácar took over. The lighthouse is on the highest point behind Marina de la Torre and Mojácar will feature on all new maritime maps. Apart from a linked equipment storage facility there is a viewing area and small garden. The land was donated by Mojácar town hall.

Another Change in Inheritance Laws In recent years there have been important changes in the inheritance laws in Andalucía that have greatly benefitted inheritors. A few years ago, if a person inherited a property that was the main home of the person who died, they could not sell it for 10 years without incurring a tax based on the value. This was then reduced to two years, but from September 3rd there is no time limit at all. This is good news, particularly with the recent rise in house prices. The amount of inheritance tax in Andalucía is now nil in the case of a direct relative who inherits from their spouse or a parent, with an upper limit on the amount of money that is very generous at no more than 1 million euros per inheritor. For people in a non-married partnership that is considered stable, where there is the intention that property or goods will be left to the other partner in a will, it is essential that they register themselves as being a ‘pareja de hecho’,