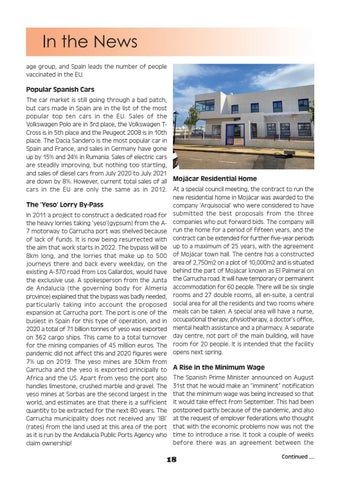 In the News age group, and Spain leads the number of people vaccinated in the EU.

Popular Spanish Cars The car market is still going through a bad patch, but cars made in Spain are in the list of the most popular top ten cars in the EU. Sales of the Volkswagen Polo are in 3rd place, the Volkswagen TCross is in 5th place and the Peugeot 2008 is in 10th place. The Dacia Sandero is the most popular car in Spain and France, and sales in Germany have gone up by 15% and 24% in Rumania. Sales of electric cars are steadily improving, but nothing too startling, and sales of diesel cars from July 2020 to July 2021 are down by 8%. However, current total sales of all Mojácar Residential Home cars in the EU are only the same as in 2012. At a special council meeting, the contract to run the new residential home in Mojácar was awarded to the The ‘Yeso’ Lorry By-Pass company ‘Arquisocial’ who were considered to have In 2011 a project to construct a dedicated road for submitted the best proposals from the three the heavy lorries taking ‘yeso’(gypsum) from the A- companies who put forward bids. The company will 7 motorway to Garrucha port was shelved because run the home for a period of fifteen years, and the of lack of funds. It is now being resurrected with contract can be extended for further five-year periods the aim that work starts in 2022. The bypass will be up to a maximum of 25 years, with the agreement 8km long, and the lorries that make up to 500 of Mojácar town hall. The centre has a constructed journeys there and back every weekday, on the area of 2,750m2 on a plot of 10,000m2 and is situated existing A-370 road from Los Gallardos, would have behind the part of Mojácar known as El Palmeral on the exclusive use. A spokesperson from the Junta the Garrucha road. It will have temporary or permanent de Andalucía (the governing body for Almería accommodation for 60 people. There will be six single province) explained that the bypass was badly needed, rooms and 27 double rooms, all en-suite, a central particularly taking into account the proposed social area for all the residents and two rooms where expansion at Garrucha port. The port is one of the meals can be taken. A special area will have a nurse, busiest in Spain for this type of operation, and in occupational therapy, physiotherapy, a doctor’s office, 2020 a total of 7.1 billion tonnes of yeso was exported mental health assistance and a pharmacy. A separate on 362 cargo ships. This came to a total turnover day centre, not part of the main building, will have for the mining companies of 45 million euros. The room for 20 people. It is intended that the facility pandemic did not affect this and 2020 figures were opens next spring. 7% up on 2019. The yeso mines are 30km from Garrucha and the yeso is exported principally to A Rise in the Minimum Wage Africa and the US. Apart from yeso the port also The Spanish Prime Minister announced on August handles limestone, crushed marble and gravel. The 31st that he would make an “imminent” notification yeso mines at Sorbas are the second largest in the that the minimum wage was being increased so that world, and estimates are that there is a sufficient it would take effect from September. This had been quantity to be extracted for the next 80 years. The postponed partly because of the pandemic, and also Garrucha municipality does not received any ‘IBI’ at the request of employer federations who thought (rates) from the land used at this area of the port that with the economic problems now was not the as it is run by the Andalucía Public Ports Agency who time to introduce a rise. It took a couple of weeks before there was an agreement between the claim ownership!