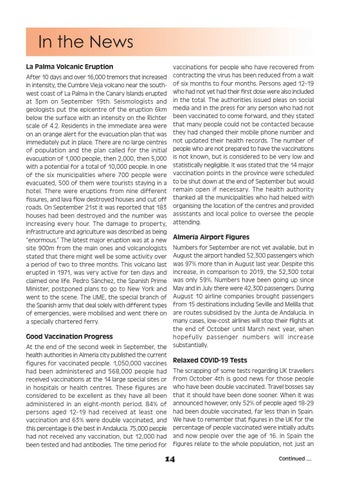 In the News La Palma Volcanic Eruption After 10 days and over 16,000 tremors that increased in intensity, the Cumbre Vieja volcano near the southwest coast of La Palma in the Canary Islands erupted at 3pm on September 19th. Seismologists and geologists put the epicentre of the eruption 6km below the surface with an intensity on the Richter scale of 4.2. Residents in the immediate area were on an orange alert for the evacuation plan that was immediately put in place. There are no large centres of population and the plan called for the initial evacuation of 1,000 people, then 2,000, then 5,000 with a potential for a total of 10,000 people. In one of the six municipalities where 700 people were evacuated, 500 of them were tourists staying in a hotel. There were eruptions from nine different fissures, and lava flow destroyed houses and cut off roads. On September 21st it was reported that 183 houses had been destroyed and the number was increasing every hour. The damage to property, infrastructure and agriculture was described as being “enormous.” The latest major eruption was at a new site 900m from the main ones and volcanologists stated that there might well be some activity over a period of two to three months. This volcano last erupted in 1971, was very active for ten days and claimed one life. Pedro Sánchez, the Spanish Prime Minister, postponed plans to go to New York and went to the scene. The UME, the special branch of the Spanish army that deal solely with different types of emergencies, were mobilised and went there on a specially chartered ferry.

vaccinations for people who have recovered from contracting the virus has been reduced from a wait of six months to four months. Persons aged 12-19 who had not yet had their first dose were also included in the total. The authorities issued pleas on social media and in the press for any person who had not been vaccinated to come forward, and they stated that many people could not be contacted because they had changed their mobile phone number and not updated their health records. The number of people who are not prepared to have the vaccinations is not known, but is considered to be very low and statistically negligible. It was stated that the 14 major vaccination points in the province were scheduled to be shut down at the end of September but would remain open if necessary. The health authority thanked all the municipalities who had helped with organising the location of the centres and provided assistants and local police to oversee the people attending.

Numbers for September are not yet available, but in August the airport handled 52,300 passengers which was 97% more than in August last year. Despite this increase, in comparison to 2019, the 52,300 total was only 59%. Numbers have been going up since May and in July there were 42,300 passengers. During August 10 airline companies brought passengers from 15 destinations including Seville and Melilla that are routes subsidised by the Junta de Andalucía. In many cases, low-cost airlines will stop their flights at the end of October until March next year, when Good Vaccination Progress hopefully passenger numbers will increase At the end of the second week in September, the substantially. health authorities in Almería city published the current figures for vaccinated people. 1,050,000 vaccines Relaxed COVID-19 Tests had been administered and 568,000 people had The scrapping of some tests regarding UK travellers received vaccinations at the 14 large special sites or from October 4th is good news for those people in hospitals or health centres. These figures are who have been double vaccinated. Travel bosses say considered to be excellent as they have all been that it should have been done sooner. When it was administered in an eight-month period. 84% of announced however, only 52% of people aged 18-29 persons aged 12-19 had received at least one had been double vaccinated, far less than in Spain. vaccination and 63% were double vaccinated, and We have to remember that figures in the UK for the this percentage is the best in Andalucía. 75,000 people percentage of people vaccinated were initially adults had not received any vaccination, but 12,000 had and now people over the age of 16. In Spain the been tested and had antibodies. The time period for figures relate to the whole population, not just an