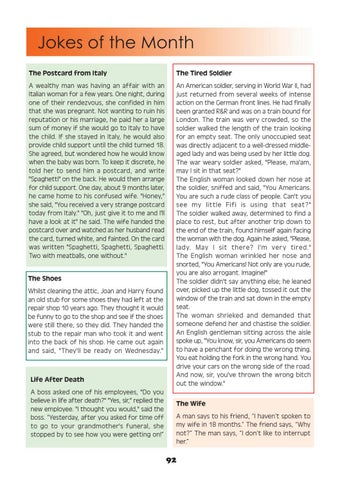 Jokes of the Month The Postcard from Italy

A wealthy man was having an affair with an Italian woman for a few years. One night, during one of their rendezvous, she confided in him that she was pregnant. Not wanting to ruin his reputation or his marriage, he paid her a large sum of money if she would go to Italy to have the child. If she stayed in Italy, he would also provide child support until the child turned 18. She agreed, but wondered how he would know when the baby was born. To keep it discrete, he told her to send him a postcard, and write &quot;Spaghetti&quot; on the back. He would then arrange for child support. One day, about 9 months later, he came home to his confused wife. &quot;Honey,&quot; she said, &quot;You received a very strange postcard today from Italy.&quot; &quot;Oh, just give it to me and I&#39;ll have a look at it&quot; he said. The wife handed the postcard over and watched as her husband read the card, turned white, and fainted. On the card was written &quot;Spaghetti, Spaghetti, Spaghetti. Two with meatballs, one without.&quot;

An American soldier, serving in World War II, had just returned from several weeks of intense action on the German front lines. He had finally been granted R&amp;R and was on a train bound for London. The train was very crowded, so the soldier walked the length of the train looking for an empty seat. The only unoccupied seat was directly adjacent to a well-dressed middleaged lady and was being used by her little dog. The war weary soldier asked, &quot;Please, ma&#39;am, may I sit in that seat?&quot; The English woman looked down her nose at the soldier, sniffed and said, &quot;You Americans. You are such a rude class of people. Can&#39;t you see my little Fifi is using that seat?&quot; The soldier walked away, determined to find a place to rest, but after another trip down to the end of the train, found himself again facing the woman with the dog. Again he asked, &quot;Please, lady. May I sit there? I&#39;m very tired.&quot; The English woman wrinkled her nose and snorted, &quot;You Americans! Not only are you rude, you are also arrogant. Imagine!&quot; The soldier didn&#39;t say anything else; he leaned over, picked up the little dog, tossed it out the window of the train and sat down in the empty seat. The woman shrieked and demanded that someone defend her and chastise the soldier. An English gentleman sitting across the aisle spoke up, &quot;You know, sir, you Americans do seem to have a penchant for doing the wrong thing. You eat holding the fork in the wrong hand. You drive your cars on the wrong side of the road. And now, sir, you&#39;ve thrown the wrong bitch out the window.&quot;

The Shoes Whilst cleaning the attic, Joan and Harry found an old stub for some shoes they had left at the repair shop 10 years ago. They thought it would be funny to go to the shop and see if the shoes were still there, so they did. They handed the stub to the repair man who took it and went into the back of his shop. He came out again and said, &quot;They&#39;ll be ready on Wednesday.&quot;

Life After Death A boss asked one of his employees, &quot;Do you believe in life after death?&quot; &quot;Yes, sir,&quot; replied the new employee. &quot;I thought you would,&quot; said the boss. “Yesterday, after you asked for time off to go to your grandmother&#39;s funeral, she stopped by to see how you were getting on!”