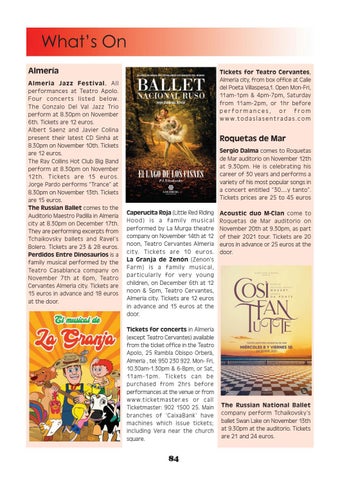 Roquetas de Mar Sergio Dalma comes to Roquetas de Mar auditorio on November 12th at 9.30pm. He is celebrating his career of 30 years and performs a variety of his most popular songs in a concert entitled “30…..y tanto”. Tickets prices are 25 to 45 euros Caperucita Roja (Little Red Riding Hood) is a family musical performed by La Murga theatre company on November 14th at 12 noon, Teatro Cervantes Almería city. Tickets are 10 euros. La Granja de Zenón (Zenon’s Farm) is a family musical, particularly for very young children, on December 6th at 12 noon &amp; 5pm, Teatro Cervantes, Almería city. Tickets are 12 euros in advance and 15 euros at the door. Tickets for concerts in Almería (except Teatro Cervantes) available from the ticket office in the Teatro Apolo, 25 Rambla Obispo Orberá, Almería , tel: 950 230 922. Mon- Fri, 10.30am-1.30pm &amp; 6-8pm, or Sat, 11am-1pm. Tickets can be purchased from 2hrs before performances at the venue or from www.ticketmaster.es or call Ticketmaster: 902 1500 25. Main branches of ‘CaixaBank’ have machines which issue tickets; including Vera near the church square.

Acoustic duo M-Clan come to Roquetas de Mar auditorio on November 20th at 9.30pm, as part of their 2021 tour. Tickets are 20 euros in advance or 25 euros at the door.

The Russian National Ballet company perform Tchaikovsky’s ballet Swan Lake on November 13th at 9.30pm at the auditorio. Tickets are 21 and 24 euros.