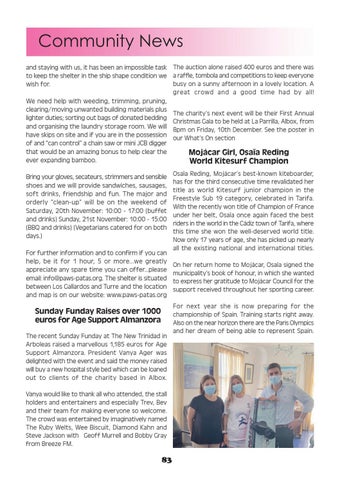 Community News and staying with us, it has been an impossible task The auction alone raised 400 euros and there was to keep the shelter in the ship shape condition we a raffle, tombola and competitions to keep everyone busy on a sunny afternoon in a lovely location. A wish for. great crowd and a good time had by all! We need help with weeding, trimming, pruning, clearing/moving unwanted building materials plus The charity’s next event will be their First Annual lighter duties; sorting out bags of donated bedding Christmas Gala to be held at La Parrilla, Albox, from and organising the laundry storage room. We will 8pm on Friday, 10th December. See the poster in Photo by Aaron Baglietto have skips on site and if you are in the possession our What’s On section of and “can control” a chain saw or mini JCB digger that would be an amazing bonus to help clear the Mojácar Girl, Osaïa Reding ever expanding bamboo. World Kitesurf Champion Bring your gloves, secateurs, strimmers and sensible shoes and we will provide sandwiches, sausages, soft drinks, friendship and fun. The major and orderly “clean-up” will be on the weekend of Saturday, 20th November: 10:00 - 17:00 (buffet and drinks) Sunday, 21st November: 10:00 - 15:00 (BBQ and drinks) (Vegetarians catered for on both days.) For further information and to confirm if you can help, be it for 1 hour, 5 or more...we greatly appreciate any spare time you can offer...please email: info@paws-patas.org. The shelter is situated between Los Gallardos and Turre and the location and map is on our website: www.paws-patas.org

Sunday Funday Raises over 1000 euros for Age Support Almanzora The recent Sunday Funday at The New Trinidad in Arboleas raised a marvellous 1,185 euros for Age Support Almanzora. President Vanya Ager was delighted with the event and said the money raised will buy a new hospital style bed which can be loaned out to clients of the charity based in Albox. Vanya would like to thank all who attended, the stall holders and entertainers and especially Trev, Bev and their team for making everyone so welcome. The crowd was entertained by imaginatively named The Ruby Welts, Wee Biscuit, Diamond Kahn and Steve Jackson with Geoff Murrell and Bobby Gray Photo by Aaron Baglietto from Breeze FM.

Osaïa Reding, Mojácar’s best-known kiteboarder, has for the third consecutive time revalidated her title as world Kitesurf junior champion in the Freestyle Sub 19 category, celebrated in Tarifa. With the recently won title of Champion of France under her belt, Osaïa once again faced the best riders in the world in the Cádiz town of Tarifa, where this time she won the well-deserved world title. Now only 17 years of age, she has picked up nearly all the existing national and international titles. On her return home to Mojácar, Osaïa signed the municipality’s book of honour, in which she wanted to express her gratitude to Mojácar Council for the support received throughout her sporting career. For next year she is now preparing for the championship of Spain. Training starts right away. Also on the near horizon there are the Paris Olympics and her dream of being able to represent Spain.