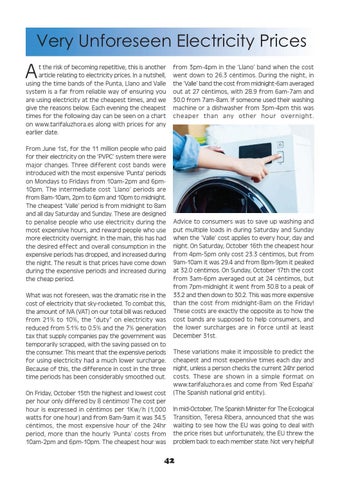 t the risk of becoming repetitive, this is another article relating to electricity prices. In a nutshell, using the time bands of the Punta, Llano and Valle system is a far from reliable way of ensuring you are using electricity at the cheapest times, and we give the reasons below. Each evening the cheapest times for the following day can be seen on a chart on www.tarifaluzhora.es along with prices for any earlier date. From June 1st, for the 11 million people who paid for their electricity on the ‘PVPC’ system there were major changes. Three different cost bands were introduced with the most expensive ‘Punta’ periods on Mondays to Fridays from 10am-2pm and 6pm10pm. The intermediate cost ‘Llano’ periods are from 8am-10am, 2pm to 6pm and 10pm to midnight. The cheapest ‘Valle’ period is from midnight to 8am and all day Saturday and Sunday. These are designed to penalise people who use electricity during the most expensive hours, and reward people who use more electricity overnight. In the main, this has had the desired effect and overall consumption in the expensive periods has dropped, and increased during the night. The result is that prices have come down during the expensive periods and increased during the cheap period. What was not foreseen, was the dramatic rise in the cost of electricity that sky-rocketed. To combat this, the amount of IVA (VAT) on our total bill was reduced from 21% to 10%, the “duty” on electricity was reduced from 5.1% to 0.5% and the 7% generation tax that supply companies pay the government was temporarily scrapped, with the saving passed on to the consumer. This meant that the expensive periods for using electricity had a much lower surcharge. Because of this, the difference in cost in the three time periods has been considerably smoothed out. On Friday, October 15th the highest and lowest cost per hour only differed by 8 céntimos! The cost per hour is expressed in céntimos per 1Kw/h (1,000 watts for one hour) and from 8am-9am it was 34.5 céntimos, the most expensive hour of the 24hr period, more than the hourly ‘Punta’ costs from 10am-2pm and 6pm-10pm. The cheapest hour was

from 3pm-4pm in the ‘Llano’ band when the cost went down to 26.3 céntimos. During the night, in the ‘Valle’ band the cost from midnight-6am averaged out at 27 céntimos, with 28.9 from 6am-7am and 30.0 from 7am-8am. If someone used their washing machine or a dishwasher from 3pm-4pm this was cheaper than any other hour overnight.

Advice to consumers was to save up washing and put multiple loads in during Saturday and Sunday when the ‘Valle’ cost applies to every hour, day and night. On Saturday, October 16th the cheapest hour from 4pm-5pm only cost 23.3 céntimos, but from 9am-10am it was 29.4 and from 8pm-9pm it peaked at 32.0 céntimos. On Sunday, October 17th the cost from 3am-6pm averaged out at 24 céntimos, but from 7pm-midnight it went from 30.8 to a peak of 33.2 and then down to 30.2. This was more expensive than the cost from midnight-8am on the Friday! These costs are exactly the opposite as to how the cost bands are supposed to help consumers, and the lower surcharges are in force until at least December 31st. These variations make it impossible to predict the cheapest and most expensive times each day and night, unless a person checks the current 24hr period costs. These are shown in a simple format on www.tarifaluzhora.es and come from ‘Red España’ (The Spanish national grid entity). In mid-October, The Spanish Minister for The Ecological Transition, Teresa Ribera, announced that she was waiting to see how the EU was going to deal with the price rises but unfortunately, the EU threw the problem back to each member state. Not very helpful!