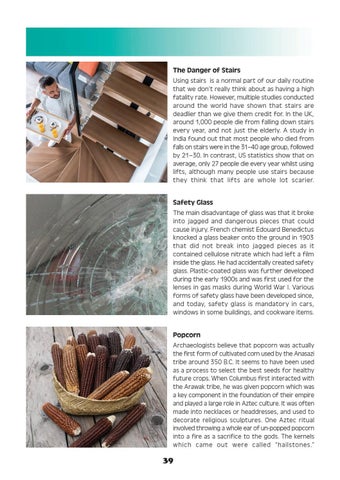 The Danger of Stairs Using stairs is a normal part of our daily routine that we don’t really think about as having a high fatality rate. However, multiple studies conducted around the world have shown that stairs are deadlier than we give them credit for. In the UK, around 1,000 people die from falling down stairs every year, and not just the elderly. A study in India found out that most people who died from falls on stairs were in the 31–40 age group, followed by 21–30. In contrast, US statistics show that on average, only 27 people die every year whilst using lifts, although many people use stairs because they think that lifts are whole lot scarier. Safety Glass The main disadvantage of glass was that it broke into jagged and dangerous pieces that could cause injury. French chemist Edouard Benedictus knocked a glass beaker onto the ground in 1903 that did not break into jagged pieces as it contained cellulose nitrate which had left a film inside the glass. He had accidentally created safety glass. Plastic-coated glass was further developed during the early 1900s and was first used for the lenses in gas masks during World War I. Various forms of safety glass have been developed since, and today, safety glass is mandatory in cars, windows in some buildings, and cookware items. Popcorn Archaeologists believe that popcorn was actually the first form of cultivated corn used by the Anasazi tribe around 350 B.C. It seems to have been used as a process to select the best seeds for healthy future crops. When Columbus first interacted with the Arawak tribe, he was given popcorn which was a key component in the foundation of their empire and played a large role in Aztec culture. It was often made into necklaces or headdresses, and used to decorate religious sculptures. One Aztec ritual involved throwing a whole ear of un-popped popcorn into a fire as a sacrifice to the gods. The kernels which came out were called “hailstones.”