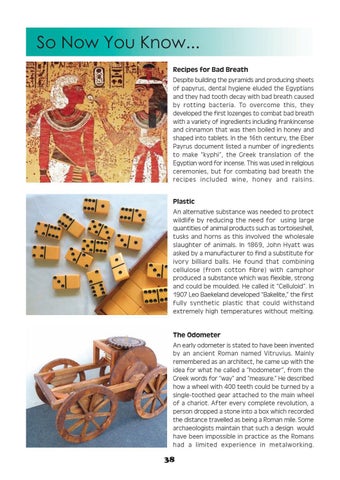 So Now You Know... Recipes for Bad Breath Despite building the pyramids and producing sheets of papyrus, dental hygiene eluded the Egyptians and they had tooth decay with bad breath caused by rotting bacteria. To overcome this, they developed the first lozenges to combat bad breath with a variety of ingredients including frankincense and cinnamon that was then boiled in honey and shaped into tablets. In the 16th century, the Eber Payrus document listed a number of ingredients to make “kyphi”, the Greek translation of the Egyptian word for incense. This was used in religious ceremonies, but for combating bad breath the recipes included wine, honey and raisins. Plastic An alternative substance was needed to protect wildlife by reducing the need for using large quantities of animal products such as tortoiseshell, tusks and horns as this involved the wholesale slaughter of animals. In 1869, John Hyatt was asked by a manufacturer to find a substitute for ivory billiard balls. He found that combining cellulose (from cotton fibre) with camphor produced a substance which was flexible, strong and could be moulded. He called it “Celluloid”. In 1907 Leo Baekeland developed “Bakelite,” the first fully synthetic plastic that could withstand extremely high temperatures without melting. The Odometer An early odometer is stated to have been invented by an ancient Roman named Vitruvius. Mainly remembered as an architect, he came up with the idea for what he called a “hodometer”, from the Greek words for “way” and “measure.” He described how a wheel with 400 teeth could be turned by a single-toothed gear attached to the main wheel of a chariot. After every complete revolution, a person dropped a stone into a box which recorded the distance travelled as being a Roman mile. Some archaeologists maintain that such a design would have been impossible in practice as the Romans had a limited experience in metalworking.