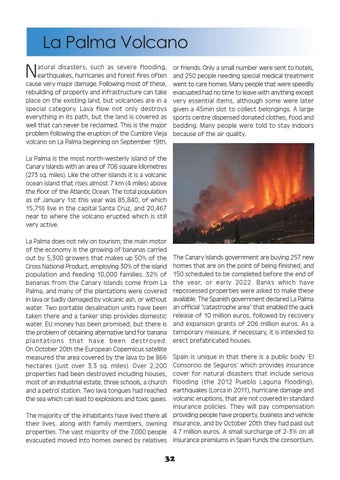 atural disasters, such as severe flooding, earthquakes, hurricanes and forest fires often cause very major damage. Following most of these, rebuilding of property and infrastructure can take place on the existing land, but volcanoes are in a special category. Lava flow not only destroys everything in its path, but the land is covered as well that can never be reclaimed. This is the major problem following the eruption of the Cumbre Vieja volcano on La Palma beginning on September 19th.

or friends. Only a small number were sent to hotels, and 250 people needing special medical treatment went to care homes. Many people that were speedily evacuated had no time to leave with anything except very essential items, although some were later given a 45min slot to collect belongings. A large sports centre dispensed donated clothes, food and bedding. Many people were told to stay indoors because of the air quality.

La Palma is the most north-westerly island of the Canary Islands with an area of 708 square kilometres (273 sq. miles). Like the other islands it is a volcanic ocean island that rises almost 7 km (4 miles) above the floor of the Atlantic Ocean. The total population as of January 1st this year was 85,840, of which 15,716 live in the capital Santa Cruz, and 20,467 near to where the volcano erupted which is still very active. La Palma does not rely on tourism; the main motor of the economy is the growing of bananas carried out by 5,300 growers that makes up 50% of the Gross National Product, employing 30% of the island population and feeding 10,000 families. 32% of bananas from the Canary Islands come from La Palma, and many of the plantations were covered in lava or badly damaged by volcanic ash, or without water. Two portable desalination units have been taken there and a tanker ship provides domestic water. EU money has been promised, but there is the problem of obtaining alternative land for banana plantations that have been destroyed. On October 20th the European Copernicus satellite measured the area covered by the lava to be 866 hectares (just over 3.3 sq. miles). Over 2,200 properties had been destroyed including houses, most of an industrial estate, three schools, a church and a petrol station. Two lava tongues had reached the sea which can lead to explosions and toxic gases. The majority of the inhabitants have lived there all their lives, along with family members, owning properties. The vast majority of the 7,000 people evacuated moved into homes owned by relatives

The Canary Islands government are buying 257 new homes that are on the point of being finished, and 150 scheduled to be completed before the end of the year, or early 2022. Banks which have repossessed properties were asked to make these available. The Spanish government declared La Palma an official “catastrophe area” that enabled the quick release of 10 million euros, followed by recovery and expansion grants of 206 million euros. As a temporary measure, if necessary, it is intended to erect prefabricated houses. Spain is unique in that there is a public body ‘El Consorcio de Seguros’ which provides insurance cover for natural disasters that include serious flooding (the 2012 Pueblo Laguna flooding), earthquakes (Lorca in 2011), hurricane damage and volcanic eruptions, that are not covered in standard insurance policies. They will pay compensation providing people have property, business and vehicle insurance, and by October 20th they had paid out 4.7 million euros. A small surcharge of 2-3% on all insurance premiums in Spain funds the consortium.