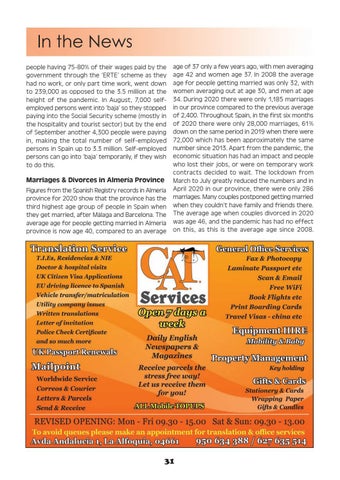 In the News age of 37 only a few years ago, with men averaging age 42 and women age 37. In 2008 the average age for people getting married was only 32, with women averaging out at age 30, and men at age 34. During 2020 there were only 1,185 marriages in our province compared to the previous average of 2,400. Throughout Spain, in the first six months of 2020 there were only 28,000 marriages, 61% down on the same period in 2019 when there were 72,000 which has been approximately the same number since 2013. Apart from the pandemic, the economic situation has had an impact and people who lost their jobs, or were on temporary work contracts decided to wait. The lockdown from Marriages &amp; Divorces in Almería Province March to July greatly reduced the numbers and in Figures from the Spanish Registry records in Almería April 2020 in our province, there were only 286 province for 2020 show that the province has the marriages. Many couples postponed getting married third highest age group of people in Spain when when they couldn’t have family and friends there. they get married, after Málaga and Barcelona. The The average age when couples divorced in 2020 average age for people getting married in Almería was age 46, and the pandemic has had no effect province is now age 40, compared to an average on this, as this is the average age since 2008. people having 75-80% of their wages paid by the government through the ‘ERTE’ scheme as they had no work, or only part time work, went down to 239,000 as opposed to the 3.5 million at the height of the pandemic. In August, 7,000 selfemployed persons went into ‘baja’ so they stopped paying into the Social Security scheme (mostly in the hospitality and tourist sector) but by the end of September another 4,300 people were paying in, making the total number of self-employed persons in Spain up to 3.3 million. Self-employed persons can go into ‘baja’ temporarily, if they wish to do this.