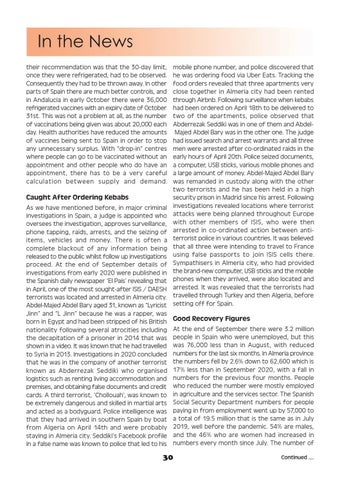 In the News their recommendation was that the 30-day limit, once they were refrigerated, had to be observed. Consequently they had to be thrown away. In other parts of Spain there are much better controls, and in Andalucía in early October there were 36,000 refrigerated vaccines with an expiry date of October 31st. This was not a problem at all, as the number of vaccinations being given was about 20,000 each day. Health authorities have reduced the amounts of vaccines being sent to Spain in order to stop any unnecessary surplus. With “drop-in” centres where people can go to be vaccinated without an appointment and other people who do have an appointment, there has to be a very careful calculation between supply and demand.

Caught After Ordering Kebabs As we have mentioned before, in major criminal investigations in Spain, a judge is appointed who oversees the investigation, approves surveillance, phone tapping, raids, arrests, and the seizing of items, vehicles and money. There is often a complete blackout of any information being released to the public whilst follow up investigations proceed. At the end of September details of investigations from early 2020 were published in the Spanish daily newspaper ‘El País’ revealing that in April, one of the most sought-after ISIS / DAESH terrorists was located and arrested in Almería city. Abdel-Majed Abdel Bary aged 31, known as “Lyricist Jinn” and “L Jinn” because he was a rapper, was born in Egypt and had been stripped of his British nationality following several atrocities including the decapitation of a prisoner in 2014 that was shown in a video. It was known that he had travelled to Syria in 2013. Investigations in 2020 concluded that he was in the company of another terrorist known as Abderrezak Seddiki who organised logistics such as renting living accommodation and premises, and obtaining false documents and credit cards. A third terrorist, ‘Chollouah’, was known to be extremely dangerous and skilled in martial arts and acted as a bodyguard. Police intelligence was that they had arrived in southern Spain by boat from Algeria on April 14th and were probably staying in Almería city. Seddiki’s Facebook profile in a false name was known to police that led to his

mobile phone number, and police discovered that he was ordering food via Uber Eats. Tracking the food orders revealed that three apartments very close together in Almería city had been rented through Airbnb. Following surveillance when kebabs had been ordered on April 18th to be delivered to two of the apartments, police observed that Abderrezak Seddiki was in one of them and AbdelMajed Abdel Bary was in the other one. The judge had issued search and arrest warrants and all three men were arrested after co-ordinated raids in the early hours of April 20th. Police seized documents, a computer, USB sticks, various mobile phones and a large amount of money. Abdel-Majed Abdel Bary was remanded in custody along with the other two terrorists and he has been held in a high security prison in Madrid since his arrest. Following investigations revealed locations where terrorist attacks were being planned throughout Europe with other members of ISIS, who were then arrested in co-ordinated action between antiterrorist police in various countries. It was believed that all three were intending to travel to France using false passports to join ISIS cells there. Sympathisers in Almería city, who had provided the brand-new computer, USB sticks and the mobile phones when they arrived, were also located and arrested. It was revealed that the terrorists had travelled through Turkey and then Algeria, before setting off for Spain.

Good Recovery Figures At the end of September there were 3.2 million people in Spain who were unemployed, but this was 76,000 less than in August, with reduced numbers for the last six months. In Almería province the numbers fell by 2.6% down to 62,600 which is 17% less than in September 2020, with a fall in numbers for the previous four months. People who reduced the number were mostly employed in agriculture and the services sector. The Spanish Social Security Department numbers for people paying in from employment went up by 57,000 to a total of 19.5 million that is the same as in July 2019, well before the pandemic. 54% are males, and the 46% who are women had increased in numbers every month since July. The number of