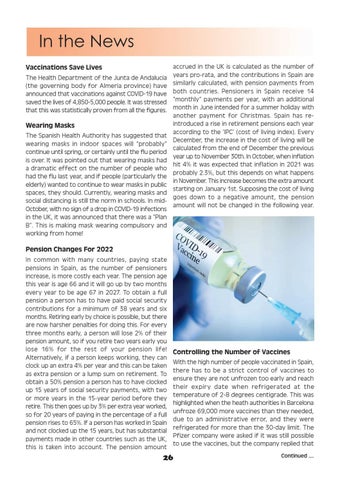 In the News Vaccinations Save Lives The Health Department of the Junta de Andalucía (the governing body for Almería province) have announced that vaccinations against COVID-19 have saved the lives of 4,850-5,000 people. It was stressed that this was statistically proven from all the figures.

Wearing Masks The Spanish Health Authority has suggested that wearing masks in indoor spaces will “probably” continue until spring, or certainly until the flu period is over. It was pointed out that wearing masks had a dramatic effect on the number of people who had the flu last year, and if people (particularly the elderly) wanted to continue to wear masks in public spaces, they should. Currently, wearing masks and social distancing is still the norm in schools. In midOctober, with no sign of a drop in COVID-19 infections in the UK, it was announced that there was a “Plan B”. This is making mask wearing compulsory and working from home!

accrued in the UK is calculated as the number of years pro-rata, and the contributions in Spain are similarly calculated, with pension payments from both countries. Pensioners in Spain receive 14 “monthly” payments per year, with an additional month in June intended for a summer holiday with another payment for Christmas. Spain has reintroduced a rise in retirement pensions each year according to the ‘IPC’ (cost of living index). Every December, the increase in the cost of living will be calculated from the end of December the previous year up to November 30th. In October, when inflation hit 4% it was expected that inflation in 2021 was probably 2.3%, but this depends on what happens in November. This increase becomes the extra amount starting on January 1st. Supposing the cost of living goes down to a negative amount, the pension amount will not be changed in the following year.

Pension Changes For 2022 In common with many countries, paying state pensions in Spain, as the number of pensioners increase, is more costly each year. The pension age this year is age 66 and it will go up by two months every year to be age 67 in 2027. To obtain a full pension a person has to have paid social security contributions for a minimum of 38 years and six months. Retiring early by choice is possible, but there are now harsher penalties for doing this. For every three months early, a person will lose 2% of their pension amount, so if you retire two years early you lose 16% for the rest of your pension life! Alternatively, if a person keeps working, they can clock up an extra 4% per year and this can be taken as extra pension or a lump sum on retirement. To obtain a 50% pension a person has to have clocked up 15 years of social security payments, with two or more years in the 15-year period before they retire. This then goes up by 3% per extra year worked, so for 20 years of paying in the percentage of a full pension rises to 65%. If a person has worked in Spain and not clocked up the 15 years, but has substantial payments made in other countries such as the UK, this is taken into account. The pension amount

Controlling the Number of Vaccines With the high number of people vaccinated in Spain, there has to be a strict control of vaccines to ensure they are not unfrozen too early and reach their expiry date when refrigerated at the temperature of 2-8 degrees centigrade. This was highlighted when the heath authorities in Barcelona unfroze 69,000 more vaccines than they needed, due to an administrative error, and they were refrigerated for more than the 30-day limit. The Pfizer company were asked if it was still possible to use the vaccines, but the company replied that