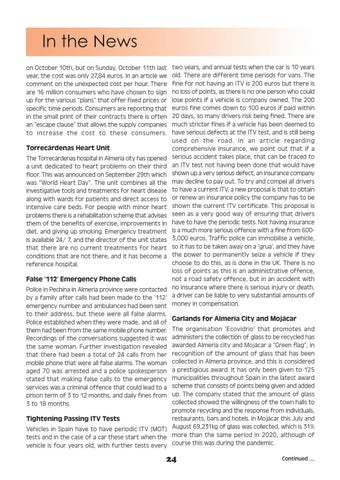 In the News on October 10th, but on Sunday, October 11th last year, the cost was only 27,84 euros. In an article we comment on the unexpected cost per hour. There are 16 million consumers who have chosen to sign up for the various “plans” that offer fixed prices or specific time periods. Consumers are reporting that in the small print of their contracts there is often an “escape clause” that allows the supply companies to increase the cost to these consumers.

Torrecárdenas Heart Unit The Torrecárdenas hospital in Almería city has opened a unit dedicated to heart problems on their third floor. This was announced on September 29th which was “World Heart Day”. The unit combines all the investigative tools and treatments for heart disease along with wards for patients and direct access to intensive care beds. For people with minor heart problems there is a rehabilitation scheme that advises them of the benefits of exercise, improvements in diet, and giving up smoking. Emergency treatment is available 24/ 7, and the director of the unit states that there are no current treatments for heart conditions that are not there, and it has become a reference hospital.

False ‘112’ Emergency Phone Calls Police in Pechina in Almería province were contacted by a family after calls had been made to the ‘112’ emergency number and ambulances had been sent to their address, but these were all false alarms. Police established when they were made, and all of them had been from the same mobile phone number. Recordings of the conversations suggested it was the same woman. Further investigation revealed that there had been a total of 24 calls from her mobile phone that were all false alarms. The woman aged 70 was arrested and a police spokesperson stated that making false calls to the emergency services was a criminal offence that could lead to a prison term of 3 to 12 months, and daily fines from 3 to 18 months.

two years, and annual tests when the car is 10 years old. There are different time periods for vans. The fine for not having an ITV is 200 euros but there is no loss of points, as there is no one person who could lose points if a vehicle is company owned. The 200 euros fine comes down to 100 euros if paid within 20 days, so many drivers risk being fined. There are much stricter fines if a vehicle has been deemed to have serious defects at the ITV test, and is still being used on the road. In an article regarding comprehensive insurance, we point out that if a serious accident takes place, that can be traced to an ITV test not having been done that would have shown up a very serious defect, an insurance company may decline to pay out. To try and compel all drivers to have a current ITV, a new proposal is that to obtain or renew an insurance policy the company has to be shown the current ITV certificate. This proposal is seen as a very good way of ensuring that drivers have to have the periodic tests. Not having insurance is a much more serious offence with a fine from 6003,000 euros. Traffic police can immobilise a vehicle, so it has to be taken away on a ‘grua’, and they have the power to permanently seize a vehicle if they choose to do this, as is done in the UK. There is no loss of points as this is an administrative offence, not a road safety offence, but in an accident with no insurance where there is serious injury or death, a driver can be liable to very substantial amounts of money in compensation.

Garlands for Almería City and Mojácar

The organisation ‘Ecovidrio’ that promotes and administers the collection of glass to be recycled has awarded Almería city and Mojácar a “Green flag”, in recognition of the amount of glass that has been collected in Almería province, and this is considered a prestigious award. It has only been given to 125 municipalities throughout Spain in the latest award scheme that consists of points being given and added up. The company stated that the amount of glass collected showed the willingness of the town halls to promote recycling and the response from individuals, restaurants, bars and hotels. In Mojácar this July and Tightening Passing ITV Tests Vehicles in Spain have to have periodic ITV (MOT) August 69,231kg of glass was collected, which is 31% tests and in the case of a car these start when the more than the same period in 2020, although of vehicle is four years old, with further tests every course this was during the pandemic.