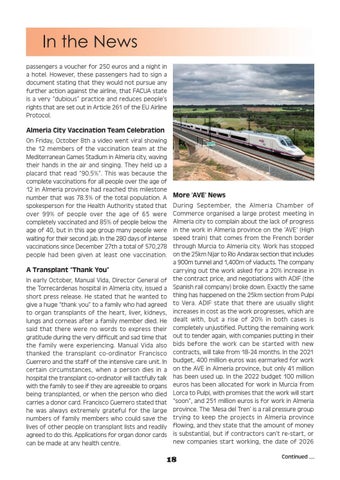 In the News passengers a voucher for 250 euros and a night in a hotel. However, these passengers had to sign a document stating that they would not pursue any further action against the airline, that FACUA state is a very “dubious” practice and reduces people’s rights that are set out in Article 261 of the EU Airline Protocol.

Almeria City Vaccination Team Celebration On Friday, October 8th a video went viral showing the 12 members of the vaccination team at the Mediterranean Games Stadium in Almería city, waving their hands in the air and singing. They held up a placard that read “90.5%”. This was because the complete vaccinations for all people over the age of 12 in Almería province had reached this milestone number that was 78.3% of the total population. A spokesperson for the Health Authority stated that over 99% of people over the age of 65 were completely vaccinated and 85% of people below the age of 40, but in this age group many people were waiting for their second jab. In the 280 days of intense vaccinations since December 27th a total of 570,278 people had been given at least one vaccination.

A Transplant “Thank You” In early October, Manual Vida, Director General of the Torrecárdenas hospital in Almería city, issued a short press release. He stated that he wanted to give a huge “thank you” to a family who had agreed to organ transplants of the heart, liver, kidneys, lungs and corneas after a family member died. He said that there were no words to express their gratitude during the very difficult and sad time that the family were experiencing. Manual Vida also thanked the transplant co-ordinator Francisco Guerrero and the staff of the intensive care unit. In certain circumstances, when a person dies in a hospital the transplant co-ordinator will tactfully talk with the family to see if they are agreeable to organs being transplanted, or when the person who died carries a donor card. Francisco Guerrero stated that he was always extremely grateful for the large numbers of family members who could save the lives of other people on transplant lists and readily agreed to do this. Applications for organ donor cards can be made at any health centre.

More ‘AVE’ News During September, the Almería Chamber of Commerce organised a large protest meeting in Almería city to complain about the lack of progress in the work in Almería province on the ‘AVE’ (High speed train) that comes from the French border through Murcia to Almería city. Work has stopped on the 25km Níjar to Río Andarax section that includes a 900m tunnel and 1,400m of viaducts. The company carrying out the work asked for a 20% increase in the contract price, and negotiations with ADIF (the Spanish rail company) broke down. Exactly the same thing has happened on the 25km section from Pulpí to Vera. ADIF state that there are usually slight increases in cost as the work progresses, which are dealt with, but a rise of 20% in both cases is completely unjustified. Putting the remaining work out to tender again, with companies putting in their bids before the work can be started with new contracts, will take from 18-24 months. In the 2021 budget, 400 million euros was earmarked for work on the AVE in Almería province, but only 41 million has been used up. In the 2022 budget 100 million euros has been allocated for work in Murcia from Lorca to Pulpí, with promises that the work will start “soon”, and 251 million euros is for work in Almería province. The ‘Mesa del Tren’ is a rail pressure group trying to keep the projects in Almería province flowing, and they state that the amount of money is substantial, but if contractors can’t re-start, or new companies start working, the date of 2026