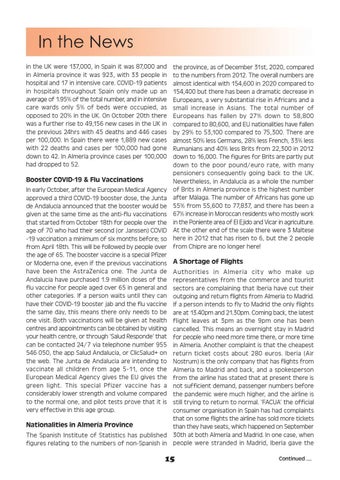 Booster COVID-19 &amp; Flu Vaccinations In early October, after the European Medical Agency approved a third COVID-19 booster dose, the Junta de Andalucía announced that the booster would be given at the same time as the anti-flu vaccinations that started from October 18th for people over the age of 70 who had their second (or Janssen) COVID -19 vaccination a minimum of six months before; so from April 18th. This will be followed by people over the age of 65. The booster vaccine is a special Pfizer or Moderna one, even if the previous vaccinations have been the AstraZenica one. The Junta de Andalucía have purchased 1.9 million doses of the flu vaccine for people aged over 65 in general and other categories. If a person waits until they can have their COVID-19 booster jab and the flu vaccine the same day, this means there only needs to be one visit. Both vaccinations will be given at health centres and appointments can be obtained by visiting your health centre, or through ‘Salud Responde’ that can be contacted 24/7 via telephone number 955 546 050, the app Salud Andalucía, or ClicSalud+ on the web. The Junta de Andalucía are intending to vaccinate all children from age 5-11, once the European Medical Agency gives the EU gives the green light. This special Pfizer vaccine has a considerably lower strength and volume compared to the normal one, and pilot tests prove that it is very effective in this age group.

the province, as of December 31st, 2020, compared to the numbers from 2012. The overall numbers are almost identical with 154,600 in 2020 compared to 154,400 but there has been a dramatic decrease in Europeans, a very substantial rise in Africans and a small increase in Asians. The total number of Europeans has fallen by 27% down to 58,800 compared to 80,600, and EU nationalities have fallen by 29% to 53,100 compared to 75,300. There are almost 50% less Germans, 28% less French, 33% less Rumanians and 40% less Brits from 22,300 in 2012 down to 16,000. The figures for Brits are partly put down to the poor pound/euro rate, with many pensioners consequently going back to the UK. Nevertheless, in Andalucía as a whole the number of Brits in Almería province is the highest number after Málaga. The number of Africans has gone up 55% from 55,600 to 77,837, and there has been a 67% increase in Moroccan residents who mostly work in the Poniente area of El Ejido and Vicar in agriculture. At the other end of the scale there were 3 Maltese here in 2012 that has risen to 6, but the 2 people from Chipre are no longer here!

A Shortage of Flights

Authorities in Almería city who make up representatives from the commerce and tourist sectors are complaining that Iberia have cut their outgoing and return flights from Almería to Madrid. If a person intends to fly to Madrid the only flights are at 13.40pm and 21.30pm. Coming back, the latest flight leaves at 3pm as the 9pm one has been cancelled. This means an overnight stay in Madrid for people who need more time there, or more time in Almería. Another complaint is that the cheapest return ticket costs about 280 euros. Iberia (Air Nostrum) is the only company that has flights from Almería to Madrid and back, and a spokesperson from the airline has stated that at present there is not sufficient demand, passenger numbers before the pandemic were much higher, and the airline is still trying to return to normal. ‘FACUA’ the official consumer organisation in Spain has had complaints that on some flights the airline has sold more tickets Nationalities in Almería Province than they have seats, which happened on September The Spanish Institute of Statistics has published 30th at both Almería and Madrid. In one case, when figures relating to the numbers of non-Spanish in people were stranded in Madrid, Iberia gave the