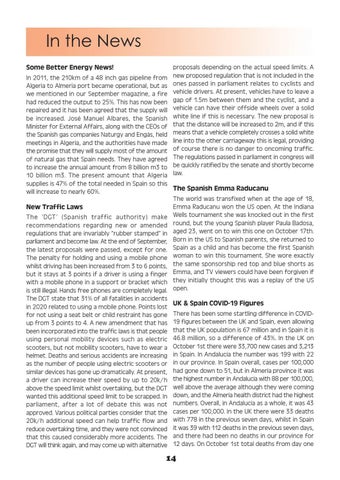 In the News Some Better Energy News!

proposals depending on the actual speed limits. A new proposed regulation that is not included in the ones passed in parliament relates to cyclists and vehicle drivers. At present, vehicles have to leave a gap of 1.5m between them and the cyclist, and a vehicle can have their offside wheels over a solid white line if this is necessary. The new proposal is that the distance will be increased to 2m, and if this means that a vehicle completely crosses a solid white line into the other carriageway this is legal, providing of course there is no danger to oncoming traffic. The regulations passed in parliament in congress will be quickly ratified by the senate and shortly become law.

In 2011, the 210km of a 48 inch gas pipeline from Algeria to Almeria port became operational, but as we mentioned in our September magazine, a fire had reduced the output to 25%. This has now been repaired and it has been agreed that the supply will be increased. José Manuel Albares, the Spanish Minister for External Affairs, along with the CEOs of the Spanish gas companies Naturgy and Engás, held meetings in Algeria, and the authorities have made the promise that they will supply most of the amount of natural gas that Spain needs. They have agreed to increase the annual amount from 8 billion m3 to 10 billion m3. The present amount that Algeria supplies is 47% of the total needed in Spain so this The Spanish Emma Raducanu will increase to nearly 60%. The world was transfixed when at the age of 18, Emma Raducanu won the US open. At the Indiana New Traffic Laws The ‘DGT’ (Spanish traffic authority) make Wells tournament she was knocked out in the first recommendations regarding new or amended round, but the young Spanish player Paula Badosa, regulations that are invariably “rubber stamped” in aged 23, went on to win this one on October 17th. parliament and become law. At the end of September, Born in the US to Spanish parents, she returned to the latest proposals were passed, except for one. Spain as a child and has become the first Spanish The penalty for holding and using a mobile phone woman to win this tournament. She wore exactly whilst driving has been increased from 3 to 6 points, the same sponsorship red top and blue shorts as but it stays at 3 points if a driver is using a finger Emma, and TV viewers could have been forgiven if with a mobile phone in a support or bracket which they initially thought this was a replay of the US is still illegal. Hands free phones are completely legal. open. The DGT state that 31% of all fatalities in accidents in 2020 related to using a mobile phone. Points lost for not using a seat belt or child restraint has gone up from 3 points to 4. A new amendment that has been incorporated into the traffic laws is that people using personal mobility devices such as electric scooters, but not mobility scooters, have to wear a helmet. Deaths and serious accidents are increasing as the number of people using electric scooters or similar devices has gone up dramatically. At present, a driver can increase their speed by up to 20k/h above the speed limit whilst overtaking, but the DGT wanted this additional speed limit to be scrapped. In parliament, after a lot of debate this was not approved. Various political parties consider that the 20k/h additional speed can help traffic flow and reduce overtaking time, and they were not convinced that this caused considerably more accidents. The DGT will think again, and may come up with alternative

UK &amp; Spain COVID-19 Figures There has been some startling difference in COVID19 figures between the UK and Spain, even allowing that the UK population is 67 million and in Spain it is 46.8 million, so a difference of 43%. In the UK on October 1st there were 33,700 new cases and 3,213 in Spain. In Andalucía the number was 199 with 22 in our province. In Spain overall, cases per 100,000 had gone down to 51, but in Almería province it was the highest number in Andalucía with 88 per 100,000, well above the average although they were coming down, and the Almería health district had the highest numbers. Overall, in Andalucía as a whole, it was 43 cases per 100,000. In the UK there were 33 deaths with 778 in the previous seven days, whilst in Spain it was 39 with 112 deaths in the previous seven days, and there had been no deaths in our province for 12 days. On October 1st total deaths from day one