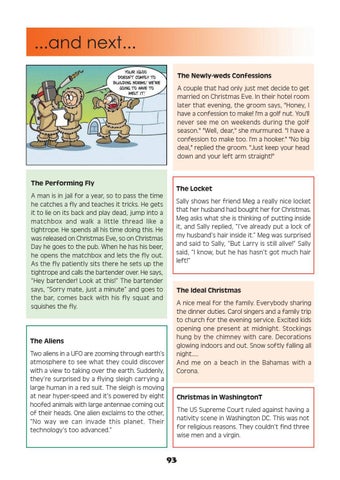 ...and next... The Newly-weds Confessions A couple that had only just met decide to get married on Christmas Eve. In their hotel room later that evening, the groom says, &quot;Honey, I have a confession to make! I&#39;m a golf nut. You&#39;ll never see me on weekends during the golf season.&quot; &quot;Well, dear,&quot; she murmured. &quot;I have a confession to make too. I&#39;m a hooker.&quot; &quot;No big deal,&quot; replied the groom. &quot;Just keep your head down and your left arm straight!&quot;

The Performing Fly A man is in jail for a year, so to pass the time he catches a fly and teaches it tricks. He gets it to lie on its back and play dead, jump into a matchbox and walk a little thread like a tightrope. He spends all his time doing this. He was released on Christmas Eve, so on Christmas Day he goes to the pub. When he has his beer, he opens the matchbox and lets the fly out. As the fly patiently sits there he sets up the tightrope and calls the bartender over. He says, “Hey bartender! Look at this!” The bartender says, “Sorry mate, just a minute” and goes to the bar, comes back with his fly squat and squishes the fly.

The Aliens Two aliens in a UFO are zooming through earth’s atmosphere to see what they could discover with a view to taking over the earth. Suddenly, they’re surprised by a flying sleigh carrying a large human in a red suit. The sleigh is moving at near hyper-speed and it’s powered by eight hoofed animals with large antennae coming out of their heads. One alien exclaims to the other, “No way we can invade this planet. Their technology’s too advanced.”

The Locket Sally shows her friend Meg a really nice locket that her husband had bought her for Christmas. Meg asks what she is thinking of putting inside it, and Sally replied, “I’ve already put a lock of my husband’s hair inside it.” Meg was surprised and said to Sally, “But Larry is still alive!” Sally said, “I know, but he has hasn’t got much hair left!”

The Ideal Christmas A nice meal for the family. Everybody sharing the dinner duties. Carol singers and a family trip to church for the evening service. Excited kids opening one present at midnight. Stockings hung by the chimney with care. Decorations glowing indoors and out. Snow softly falling all night..... And me on a beach in the Bahamas with a Corona.

Christmas in WashingtonT The US Supreme Court ruled against having a nativity scene in Washington DC. This was not for religious reasons. They couldn’t find three wise men and a virgin.