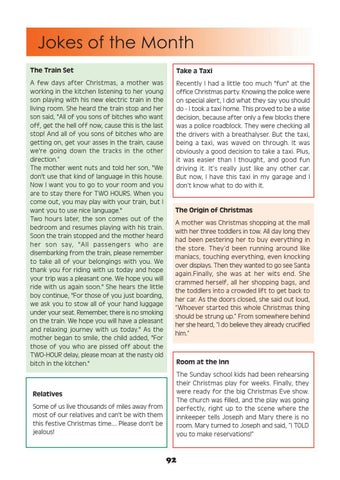 Jokes of the Month The Train Set

A few days after Christmas, a mother was working in the kitchen listening to her young son playing with his new electric train in the living room. She heard the train stop and her son said, &quot;All of you sons of bitches who want off, get the hell off now, cause this is the last stop! And all of you sons of bitches who are getting on, get your asses in the train, cause we&#39;re going down the tracks in the other direction.” The mother went nuts and told her son, &quot;We don&#39;t use that kind of language in this house. Now I want you to go to your room and you are to stay there for TWO HOURS. When you come out, you may play with your train, but I want you to use nice language.&quot; Two hours later, the son comes out of the bedroom and resumes playing with his train. Soon the train stopped and the mother heard her son say, &quot;All passengers who are disembarking from the train, please remember to take all of your belongings with you. We thank you for riding with us today and hope your trip was a pleasant one. We hope you will ride with us again soon.&quot; She hears the little boy continue, &quot;For those of you just boarding, we ask you to stow all of your hand luggage under your seat. Remember, there is no smoking on the train. We hope you will have a pleasant and relaxing journey with us today.&quot; As the mother began to smile, the child added, &quot;For those of you who are pissed off about the TWO-HOUR delay, please moan at the nasty old bitch in the kitchen.&quot;

Recently I had a little too much &quot;fun&quot; at the office Christmas party. Knowing the police were on special alert, I did what they say you should do - I took a taxi home. This proved to be a wise decision, because after only a few blocks there was a police roadblock. They were checking all the drivers with a breathalyser. But the taxi, being a taxi, was waved on through. It was obviously a good decision to take a taxi. Plus, it was easier than I thought, and good fun driving it. It’s really just like any other car. But now, I have this taxi in my garage and I don’t know what to do with it.

Relatives Some of us live thousands of miles away from most of our relatives and can&#39;t be with them this festive Christmas time.... Please don&#39;t be jealous!

The Origin of Christmas A mother was Christmas shopping at the mall with her three toddlers in tow. All day long they had been pestering her to buy everything in the store. They’d been running around like maniacs, touching everything, even knocking over displays. Then they wanted to go see Santa again.Finally, she was at her wits end. She crammed herself, all her shopping bags, and the toddlers into a crowded lift to get back to her car. As the doors closed, she said out loud, “Whoever started this whole Christmas thing should be strung up.” From somewhere behind her she heard, “I do believe they already crucified him.”

Room at the Inn The Sunday school kids had been rehearsing their Christmas play for weeks. Finally, they were ready for the big Christmas Eve show. The church was filled, and the play was going perfectly, right up to the scene where the innkeeper tells Joseph and Mary there is no room. Mary turned to Joseph and said, “I TOLD you to make reservations!”