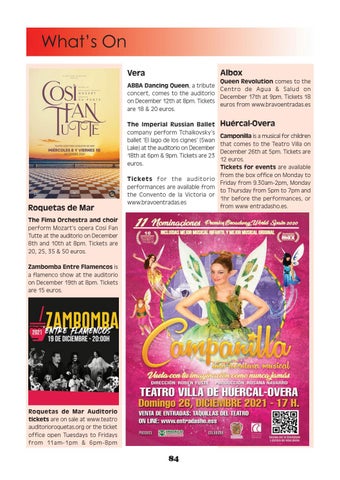 Camponilla is a musical for children that comes to the Teatro Villa on December 26th at 5pm. Tickets are 12 euros. Tickets for events are available from the box office on Monday to Tickets for the auditorio Friday from 9.30am-2pm, Monday performances are available from to Thursday from 5pm to 7pm and the Convento de la Victoria or 1hr before the performances, or www.bravoentradas.es from www entradasho.es.

Roquetas de Mar Auditorio tickets are on sale at www.teatro auditorioroquetas.org or the ticket office open Tuesdays to Fridays from 11am-1pm &amp; 6pm-8pm