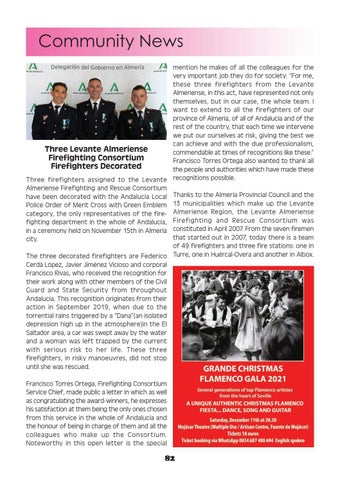 Community News mention he makes of all the colleagues for the very important job they do for society: “For me, these three firefighters from the Levante Almeriense, in this act, have represented not only themselves, but in our case, the whole team. I want to extend to all the firefighters of our province of Almería, of all of Andalucía and of the rest of the country, that each time we intervene we put our ourselves at risk, giving the best we can achieve and with the due professionalism, Three Levante Almeriense commendable at times of recognitions like these.” Firefighting Consortium Francisco Torres Ortega also wanted to thank all Firefighters Decorated the people and authorities which have made these Three firefighters assigned to the Levante recognitions possible. Almeriense Firefighting and Rescue Consortium have been decorated with the Andalucía Local Thanks to the Almería Provincial Council and the Police Order of Merit Cross with Green Emblem 13 municipalities which make up the Levante category, the only representatives of the fire- Almeriense Region, the Levante Almeriense fighting department in the whole of Andalucía, Firefighting and Rescue Consortium was in a ceremony held on November 15th in Almería constituted in April 2007. From the seven firemen that started out in 2007, today there is a team city. of 49 firefighters and three fire stations: one in The three decorated firefighters are Federico Turre, one in Huércal-Overa and another in Albox. Cerdá López, Javier Jiménez Vicioso and corporal Francisco Rivas, who received the recognition for their work along with other members of the Civil Guard and State Security from throughout Andalucía. This recognition originates from their action in September 2019, when due to the torrential rains triggered by a “Dana”(an isolated depression high up in the atmosphere)in the El Saltador area, a car was swept away by the water and a woman was left trapped by the current with serious risk to her life. These three firefighters, in risky manoeuvres, did not stop until she was rescued. Francisco Torres Ortega, Firefighting Consortium Service Chief, made public a letter in which as well as congratulating the award-winners, he expresses his satisfaction at them being the only ones chosen from this service in the whole of Andalucía and the honour of being in charge of them and all the colleagues who make up the Consortium. Noteworthy in this open letter is the special