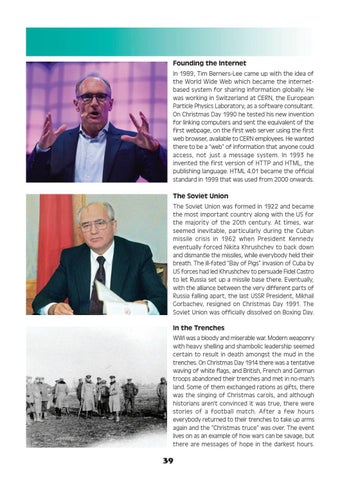 Founding the Internet In 1989, Tim Berners-Lee came up with the idea of the World Wide Web which became the internetbased system for sharing information globally. He was working in Switzerland at CERN, the European Particle Physics Laboratory, as a software consultant. On Christmas Day 1990 he tested his new invention for linking computers and sent the equivalent of the first webpage, on the first web server using the first web browser, available to CERN employees. He wanted there to be a “web” of information that anyone could access, not just a message system. In 1993 he invented the first version of HTTP and HTML, the publishing language. HTML 4.01 became the official standard in 1999 that was used from 2000 onwards.

The Soviet Union The Soviet Union was formed in 1922 and became the most important country along with the US for the majority of the 20th century. At times, war seemed inevitable, particularly during the Cuban missile crisis in 1962 when President Kennedy eventually forced Nikita Khrushchev to back down and dismantle the missiles, while everybody held their breath. The ill-fated “Bay of Pigs” invasion of Cuba by US forces had led Khrushchev to persuade Fidel Castro to let Russia set up a missile base there. Eventually, with the alliance between the very different parts of Russia falling apart, the last USSR President, Mikhail Gorbachev, resigned on Christmas Day 1991. The Soviet Union was officially dissolved on Boxing Day.

In the Trenches WWI was a bloody and miserable war. Modern weaponry with heavy shelling and shambolic leadership seemed certain to result in death amongst the mud in the trenches. On Christmas Day 1914 there was a tentative waving of white flags, and British, French and German troops abandoned their trenches and met in no-man&#39;s land. Some of them exchanged rations as gifts, there was the singing of Christmas carols, and although historians aren&#39;t convinced it was true, there were stories of a football match. After a few hours everybody returned to their trenches to take up arms again and the “Christmas truce” was over. The event lives on as an example of how wars can be savage, but there are messages of hope in the darkest hours.