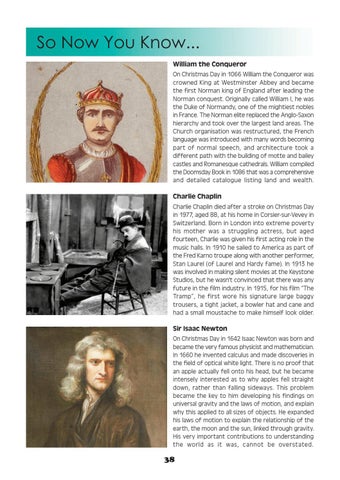 So Now You Know... William the Conqueror On Christmas Day in 1066 William the Conqueror was crowned King at Westminster Abbey and became the first Norman king of England after leading the Norman conquest. Originally called William I, he was the Duke of Normandy, one of the mightiest nobles in France. The Norman elite replaced the Anglo-Saxon hierarchy and took over the largest land areas. The Church organisation was restructured, the French language was introduced with many words becoming part of normal speech, and architecture took a different path with the building of motte and bailey castles and Romanesque cathedrals. William compiled the Doomsday Book in 1086 that was a comprehensive and detailed catalogue listing land and wealth.

Charlie Chaplin Charlie Chaplin died after a stroke on Christmas Day in 1977, aged 88, at his home in Corsier-sur-Vevey in Switzerland. Born in London into extreme poverty his mother was a struggling actress, but aged fourteen, Charlie was given his first acting role in the music halls. In 1910 he sailed to America as part of the Fred Karno troupe along with another performer, Stan Laurel (of Laurel and Hardy fame). In 1913 he was involved in making silent movies at the Keystone Studios, but he wasn&#39;t convinced that there was any future in the film industry. In 1915, for his film “The Tramp”, he first wore his signature large baggy trousers, a tight jacket, a bowler hat and cane and had a small moustache to make himself look older.

Sir Isaac Newton On Christmas Day in 1642 Isaac Newton was born and became the very famous physicist and mathematician. In 1660 he invented calculus and made discoveries in the field of optical white light. There is no proof that an apple actually fell onto his head, but he became intensely interested as to why apples fell straight down, rather than falling sideways. This problem became the key to him developing his findings on universal gravity and the laws of motion, and explain why this applied to all sizes of objects. He expanded his laws of motion to explain the relationship of the earth, the moon and the sun, linked through gravity. His very important contributions to understanding the world as it was, cannot be overstated.