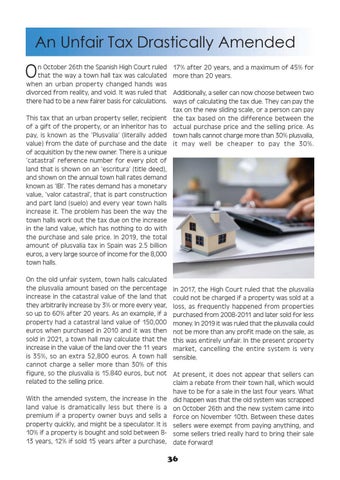 n October 26th the Spanish High Court ruled that the way a town hall tax was calculated when an urban property changed hands was divorced from reality, and void. It was ruled that there had to be a new fairer basis for calculations. This tax that an urban property seller, recipient of a gift of the property, or an inheritor has to pay, is known as the ‘Plusvalía’ (literally added value) from the date of purchase and the date of acquisition by the new owner. There is a unique ‘catastral’ reference number for every plot of land that is shown on an ‘escritura’ (title deed), and shown on the annual town hall rates demand known as ‘IBI’. The rates demand has a monetary value, ‘valor catastral’, that is part construction and part land (suelo) and every year town halls increase it. The problem has been the way the town halls work out the tax due on the increase in the land value, which has nothing to do with the purchase and sale price. In 2019, the total amount of plusvalía tax in Spain was 2.5 billion euros, a very large source of income for the 8,000 town halls. On the old unfair system, town halls calculated the plusvalía amount based on the percentage increase in the catastral value of the land that they arbitrarily increase by 3% or more every year, so up to 60% after 20 years. As an example, if a property had a catastral land value of 150,000 euros when purchased in 2010 and it was then sold in 2021, a town hall may calculate that the increase in the value of the land over the 11 years is 35%, so an extra 52,800 euros. A town hall cannot charge a seller more than 30% of this figure, so the plusvalía is 15.840 euros, but not related to the selling price. With the amended system, the increase in the land value is dramatically less but there is a premium if a property owner buys and sells a property quickly, and might be a speculator. It is 10% if a property is bought and sold between 813 years, 12% if sold 15 years after a purchase,

17% after 20 years, and a maximum of 45% for more than 20 years. Additionally, a seller can now choose between two ways of calculating the tax due. They can pay the tax on the new sliding scale, or a person can pay the tax based on the difference between the actual purchase price and the selling price. As town halls cannot charge more than 30% plusvalía, it may well be cheaper to pay the 30%.

In 2017, the High Court ruled that the plusvalía could not be charged if a property was sold at a loss, as frequently happened from properties purchased from 2008-2011 and later sold for less money. In 2019 it was ruled that the plusvalía could not be more than any profit made on the sale, as this was entirely unfair. In the present property market, cancelling the entire system is very sensible. At present, it does not appear that sellers can claim a rebate from their town hall, which would have to be for a sale in the last four years. What did happen was that the old system was scrapped on October 26th and the new system came into force on November 10th. Between these dates sellers were exempt from paying anything, and some sellers tried really hard to bring their sale date forward!