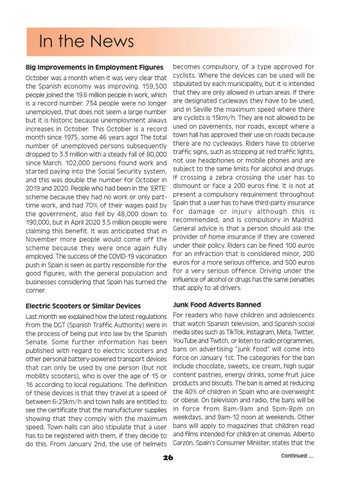 In the News Big Improvements in Employment Figures October was a month when it was very clear that the Spanish economy was improving. 159,500 people joined the 19.6 million people in work, which is a record number. 734 people were no longer unemployed, that does not seem a large number but it is historic because unemployment always increases in October. This October is a record month since 1975, some 46 years ago! The total number of unemployed persons subsequently dropped to 3.3 million with a steady fall of 80,000 since March. 102,000 persons found work and started paying into the Social Security system, and this was double the number for October in 2019 and 2020. People who had been in the ‘ERTE’ scheme because they had no work or only parttime work, and had 70% of their wages paid by the government, also fell by 48,000 down to 190,000, but in April 2020 3.5 million people were claiming this benefit. It was anticipated that in November more people would come off the scheme because they were once again fully employed. The success of the COVID-19 vaccination push in Spain is seen as partly responsible for the good figures, with the general population and businesses considering that Spain has turned the corner.

becomes compulsory, of a type approved for cyclists. Where the devices can be used will be stipulated by each municipality, but it is intended that they are only allowed in urban areas. If there are designated cycleways they have to be used, and in Seville the maximum speed where there are cyclists is 15km/h. They are not allowed to be used on pavements, nor roads, except where a town hall has approved their use on roads because there are no cycleways. Riders have to observe traffic signs, such as stopping at red traffic lights, not use headphones or mobile phones and are subject to the same limits for alcohol and drugs. If crossing a zebra crossing the user has to dismount or face a 200 euros fine. It is not at present a compulsory requirement throughout Spain that a user has to have third-party insurance for damage or injury although this is recommended, and is compulsory in Madrid. General advice is that a person should ask the provider of home insurance if they are covered under their policy. Riders can be fined 100 euros for an infraction that is considered minor, 200 euros for a more serious offence, and 500 euros for a very serious offence. Driving under the influence of alcohol or drugs has the same penalties that apply to all drivers.

Electric Scooters or Similar Devices Last month we explained how the latest regulations from the DGT (Spanish Traffic Authority) were in the process of being put into law by the Spanish Senate. Some further information has been published with regard to electric scooters and other personal battery-powered transport devices that can only be used by one person (but not mobility scooters), who is over the age of 15 or 16 according to local regulations. The definition of these devices is that they travel at a speed of between 6-25km/h and town halls are entitled to see the certificate that the manufacturer supplies showing that they comply with the maximum speed. Town halls can also stipulate that a user has to be registered with them, if they decide to do this. From January 2nd, the use of helmets

Junk Food Adverts Banned For readers who have children and adolescents that watch Spanish television, and Spanish social media sites such as TikTok, Instagram, Meta, Twitter, YouTube and Twitch, or listen to radio programmes, bans on advertising “junk food” will come into force on January 1st. The categories for the ban include chocolate, sweets, ice cream, high sugar content pastries, energy drinks, some fruit juice products and biscuits. The ban is aimed at reducing the 40% of children in Spain who are overweight or obese. On television and radio, the bans will be in force from 8am-9am and 5pm-8pm on weekdays, and 9am-12 noon at weekends. Other bans will apply to magazines that children read and films intended for children at cinemas. Alberto Garzón, Spain’s Consumer Minister, states that the