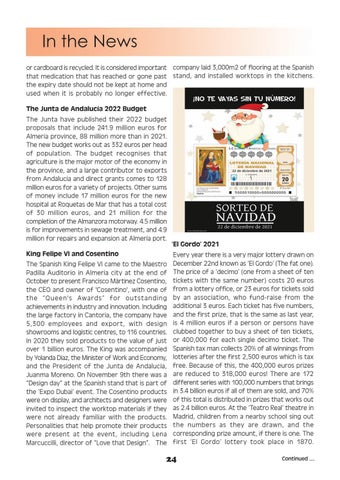 In the News or cardboard is recycled. It is considered important company laid 3,000m2 of flooring at the Spanish that medication that has reached or gone past stand, and installed worktops in the kitchens. the expiry date should not be kept at home and used when it is probably no longer effective. The Junta de Andalucía 2022 Budget The Junta have published their 2022 budget proposals that include 241.9 million euros for Almería province, 88 million more than in 2021. The new budget works out as 332 euros per head of population. The budget recognises that agriculture is the major motor of the economy in the province, and a large contributor to exports from Andalucía and direct grants comes to 128 million euros for a variety of projects. Other sums of money include 17 million euros for the new hospital at Roquetas de Mar that has a total cost of 30 million euros, and 21 million for the completion of the Almanzora motorway. 4.5 million is for improvements in sewage treatment, and 4.9 million for repairs and expansion at Almería port. King Felipe VI and Cosentino The Spanish King Felipe VI came to the Maestro Padilla Auditorio in Almería city at the end of October to present Francisco Mártinez Cosentino, the CEO and owner of &#39;Cosentino&#39;, with one of the “Queen&#39;s Awards” for outstanding achievements in industry and innovation. Including the large factory in Cantoria, the company have 5,300 employees and export, with design showrooms and logistic centres, to 116 countries. In 2020 they sold products to the value of just over 1 billion euros. The King was accompanied by Yolanda Díaz, the Minister of Work and Economy, and the President of the Junta de Andalucía, Juanma Moreno. On November 9th there was a “Design day” at the Spanish stand that is part of the ‘Expo Dubai’ event. The Cosentino products were on display, and architects and designers were invited to inspect the worktop materials if they were not already familiar with the products. Personalities that help promote their products were present at the event, including Lena Marcuccilli, director of “Love that Design”. The

‘El Gordo’ 2021 Every year there is a very major lottery drawn on December 22nd known as ‘El Gordo’ (The fat one). The price of a ‘decimo’ (one from a sheet of ten tickets with the same number) costs 20 euros from a lottery office, or 23 euros for tickets sold by an association, who fund-raise from the additional 3 euros. Each ticket has five numbers, and the first prize, that is the same as last year, is 4 million euros if a person or persons have clubbed together to buy a sheet of ten tickets, or 400,000 for each single decimo ticket. The Spanish tax man collects 20% of all winnings from lotteries after the first 2,500 euros which is tax free. Because of this, the 400,000 euros prizes are reduced to 318,000 euros! There are 172 different series with 100,000 numbers that brings in 3.4 billion euros if all of them are sold, and 70% of this total is distributed in prizes that works out as 2.4 billion euros. At the ‘Teatro Real’ theatre in Madrid, children from a nearby school sing out the numbers as they are drawn, and the corresponding prize amount, if there is one. The first ‘El Gordo’ lottery took place in 1870.