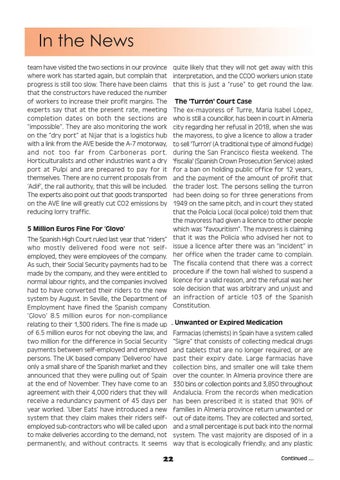 In the News team have visited the two sections in our province where work has started again, but complain that progress is still too slow. There have been claims that the constructors have reduced the number of workers to increase their profit margins. The experts say that at the present rate, meeting completion dates on both the sections are “impossible”. They are also monitoring the work on the “dry port” at Níjar that is a logistics hub with a link from the AVE beside the A-7 motorway, and not too far from Carboneras port. Horticulturalists and other industries want a dry port at Pulpí and are prepared to pay for it themselves. There are no current proposals from ‘Adif’, the rail authority, that this will be included. The experts also point out that goods transported on the AVE line will greatly cut CO2 emissions by reducing lorry traffic. 5 Million Euros Fine For ‘Glovo’ The Spanish High Court ruled last year that “riders” who mostly delivered food were not selfemployed, they were employees of the company. As such, their Social Security payments had to be made by the company, and they were entitled to normal labour rights, and the companies involved had to have converted their riders to the new system by August. In Seville, the Department of Employment have fined the Spanish company ‘Glovo’ 8.5 million euros for non-compliance relating to their 1,300 riders. The fine is made up of 6.5 million euros for not obeying the law, and two million for the difference in Social Security payments between self-employed and employed persons. The UK based company ‘Deliveroo’ have only a small share of the Spanish market and they announced that they were pulling out of Spain at the end of November. They have come to an agreement with their 4,000 riders that they will receive a redundancy payment of 45 days per year worked. ‘Uber Eats’ have introduced a new system that they claim makes their riders selfemployed sub-contractors who will be called upon to make deliveries according to the demand, not permanently, and without contracts. It seems

quite likely that they will not get away with this interpretation, and the CCOO workers union state that this is just a “ruse” to get round the law. The &#39;Turrón&#39; Court Case The ex-mayoress of Turre, María Isabel López, who is still a councillor, has been in court in Almería city regarding her refusal in 2018, when she was the mayoress, to give a licence to allow a trader to sell &#39;Turrón&#39; (A traditional type of almond fudge) during the San Francisco fiesta weekend. The &#39;fiscalía&#39; (Spanish Crown Prosecution Service) asked for a ban on holding public office for 12 years, and the payment of the amount of profit that the trader lost. The persons selling the turron had been doing so for three generations from 1949 on the same pitch, and in court they stated that the Policía Local (local police) told them that the mayoress had given a licence to other people which was “favouritism”. The mayoress is claiming that it was the Policía who advised her not to issue a licence after there was an “incident” in her office when the trader came to complain. The fiscalía contend that there was a correct procedure if the town hall wished to suspend a licence for a valid reason, and the refusal was her sole decision that was arbitrary and unjust and an infraction of article 103 of the Spanish Constitution. . Unwanted or Expired Medication Farmacias (chemists) in Spain have a system called “Sigre” that consists of collecting medical drugs and tablets that are no longer required, or are past their expiry date. Large farmacias have collection bins, and smaller one will take them over the counter. In Almería province there are 330 bins or collection points and 3,850 throughout Andalucía. From the records when medication has been prescribed it is stated that 90% of families in Almería province return unwanted or out of date items. They are collected and sorted, and a small percentage is put back into the normal system. The vast majority are disposed of in a way that is ecologically friendly, and any plastic