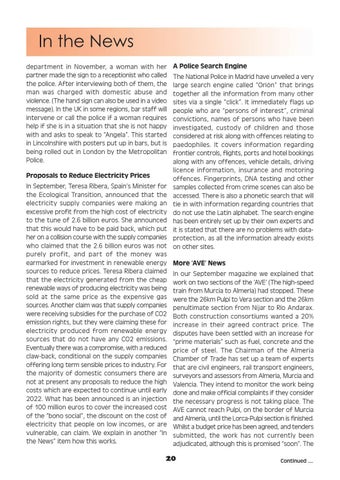 In the News department in November, a woman with her partner made the sign to a receptionist who called the police. After interviewing both of them, the man was charged with domestic abuse and violence. (The hand sign can also be used in a video message). In the UK in some regions, bar staff will intervene or call the police if a woman requires help if she is in a situation that she is not happy with and asks to speak to “Angela”. This started in Lincolnshire with posters put up in bars, but is being rolled out in London by the Metropolitan Police. Proposals to Reduce Electricity Prices In September, Teresa Ribera, Spain’s Minister for the Ecological Transition, announced that the electricity supply companies were making an excessive profit from the high cost of electricity to the tune of 2.6 billion euros. She announced that this would have to be paid back, which put her on a collision course with the supply companies who claimed that the 2.6 billion euros was not purely profit, and part of the money was earmarked for investment in renewable energy sources to reduce prices. Teresa Ribera claimed that the electricity generated from the cheap renewable ways of producing electricity was being sold at the same price as the expensive gas sources. Another claim was that supply companies were receiving subsidies for the purchase of CO2 emission rights, but they were claiming these for electricity produced from renewable energy sources that do not have any CO2 emissions. Eventually there was a compromise, with a reduced claw-back, conditional on the supply companies offering long term sensible prices to industry. For the majority of domestic consumers there are not at present any proposals to reduce the high costs which are expected to continue until early 2022. What has been announced is an injection of 100 million euros to cover the increased cost of the “bono social”, the discount on the cost of electricity that people on low incomes, or are vulnerable, can claim. We explain in another “In the News” item how this works.

A Police Search Engine The National Police in Madrid have unveiled a very large search engine called “Orión” that brings together all the information from many other sites via a single “click”. It immediately flags up people who are “persons of interest”, criminal convictions, names of persons who have been investigated, custody of children and those considered at risk along with offences relating to paedophiles. It covers information regarding frontier controls, flights, ports and hotel bookings along with any offences, vehicle details, driving licence information, insurance and motoring offences. Fingerprints, DNA testing and other samples collected from crime scenes can also be accessed. There is also a phonetic search that will tie in with information regarding countries that do not use the Latin alphabet. The search engine has been entirely set up by their own experts and it is stated that there are no problems with dataprotection, as all the information already exists on other sites. More ‘AVE’ News In our September magazine we explained that work on two sections of the ‘AVE’ (The high-speed train from Murcia to Almería) had stopped. These were the 26km Pulpí to Vera section and the 26km penultimate section from Níjar to Río Andarax. Both construction consortiums wanted a 20% increase in their agreed contract price. The disputes have been settled with an increase for “prime materials” such as fuel, concrete and the price of steel. The Chairman of the Almería Chamber of Trade has set up a team of experts that are civil engineers, rail transport engineers, surveyors and assessors from Almería, Murcia and Valencia. They intend to monitor the work being done and make official complaints if they consider the necessary progress is not taking place. The AVE cannot reach Pulpí, on the border of Murcia and Almería, until the Lorca-Pulpí section is finished. Whilst a budget price has been agreed, and tenders submitted, the work has not currently been adjudicated, although this is promised “soon”. The