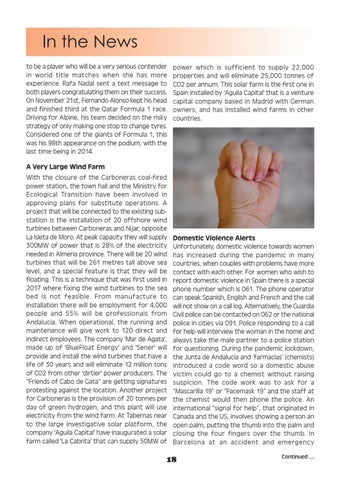 In the News to be a player who will be a very serious contender in world title matches when she has more experience. Rafa Nadal sent a text message to both players congratulating them on their success. On November 21st, Fernando Alonso kept his head and finished third at the Qatar Formula 1 race. Driving for Alpine, his team decided on the risky strategy of only making one stop to change tyres. Considered one of the giants of Formula 1, this was his 98th appearance on the podium, with the last time being in 2014. A Very Large Wind Farm With the closure of the Carboneras coal-fired power station, the town hall and the Ministry for Ecological Transition have been involved in approving plans for substitute operations. A project that will be connected to the existing substation is the installation of 20 offshore wind turbines between Carboneras and Níjar, opposite La Isleta de Moro. At peak capacity they will supply 300MW of power that is 28% of the electricity needed in Almería province. There will be 20 wind turbines that will be 261 metres tall above sea level, and a special feature is that they will be floating. This is a technique that was first used in 2017 where fixing the wind turbines to the sea bed is not feasible. From manufacture to installation there will be employment for 4,000 people and 55% will be professionals from Andalucía. When operational, the running and maintenance will give work to 120 direct and indirect employees. The company &#39;Mar de Ágata&#39;, made up of &#39;BlueFloat Energy&#39; and &#39;Sener&#39; will provide and install the wind turbines that have a life of 30 years and will eliminate 12 million tons of CO2 from other &#39;dirtier&#39; power producers. The “Friends of Cabo de Gata” are getting signatures protesting against the location. Another project for Carboneras is the provision of 20 tonnes per day of green hydrogen, and this plant will use electricity from the wind farm. At Tabernas near to the large investigative solar platform, the company &#39;Aguila Capital&#39; have inaugurated a solar farm called &#39;La Cabrita&#39; that can supply 50MW of

power which is sufficient to supply 22,000 properties and will eliminate 25,000 tonnes of CO2 per annum. This solar farm is the first one in Spain installed by &#39;Aguila Capital&#39; that is a venture capital company based in Madrid with German owners, and has installed wind farms in other countries.

Domestic Violence Alerts Unfortunately, domestic violence towards women has increased during the pandemic in many countries, when couples with problems have more contact with each other. For women who wish to report domestic violence in Spain there is a special phone number which is 061. The phone operator can speak Spanish, English and French and the call will not show on a call log. Alternatively, the Guardia Civil police can be contacted on 062 or the national police in cities via 091. Police responding to a call for help will interview the woman in the home and always take the male partner to a police station for questioning. During the pandemic lockdown, the Junta de Andalucía and ‘farmacias’ (chemists) introduced a code word so a domestic abuse victim could go to a chemist without raising suspicion. The code work was to ask for a “Mascarilla 19” or “Facemask 19” and the staff at the chemist would then phone the police. An international “signal for help”, that originated in Canada and the US, involves showing a person an open palm, putting the thumb into the palm and closing the four fingers over the thumb. In Barcelona at an accident and emergency