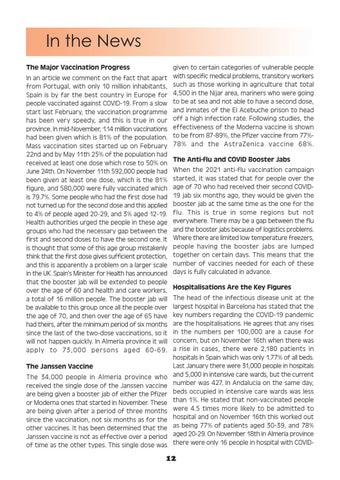 In the News The Major Vaccination Progress In an article we comment on the fact that apart from Portugal, with only 10 million inhabitants, Spain is by far the best country in Europe for people vaccinated against COVID-19. From a slow start last February, the vaccination programme has been very speedy, and this is true in our province. In mid-November, 1.14 million vaccinations had been given which is 81% of the population. Mass vaccination sites started up on February 22nd and by May 11th 25% of the population had received at least one dose which rose to 50% on June 24th. On November 11th 592,000 people had been given at least one dose, which is the 81% figure, and 580,000 were fully vaccinated which is 79.7%. Some people who had the first dose had not turned up for the second dose and this applied to 4% of people aged 20-29, and 3% aged 12-19. Health authorities urged the people in these age groups who had the necessary gap between the first and second doses to have the second one. It is thought that some of this age group mistakenly think that the first dose gives sufficient protection, and this is apparently a problem on a larger scale in the UK. Spain’s Minister for Health has announced that the booster jab will be extended to people over the age of 60 and health and care workers, a total of 16 million people. The booster jab will be available to this group once all the people over the age of 70, and then over the age of 65 have had theirs, after the minimum period of six months since the last of the two-dose vaccinations, so it will not happen quickly. In Almería province it will apply to 73,000 persons aged 60-69. The Janssen Vaccine The 34,000 people in Almería province who received the single dose of the Janssen vaccine are being given a booster jab of either the Pfizer or Moderna ones that started in November. These are being given after a period of three months since the vaccination, not six months as for the other vaccines. It has been determined that the Janssen vaccine is not as effective over a period of time as the other types. This single dose was

given to certain categories of vulnerable people with specific medical problems, transitory workers such as those working in agriculture that total 4,500 in the Níjar area, mariners who were going to be at sea and not able to have a second dose, and inmates of the El Acebuche prison to head off a high infection rate. Following studies, the effectiveness of the Moderna vaccine is shown to be from 87-89%, the Pfizer vaccine from 77%78% and the AstraZenica vaccine 68%. The Anti-flu and COVID Booster Jabs When the 2021 anti-flu vaccination campaign started, it was stated that for people over the age of 70 who had received their second COVID19 jab six months ago, they would be given the booster jab at the same time as the one for the flu. This is true in some regions but not everywhere. There may be a gap between the flu and the booster jabs because of logistics problems. Where there are limited low temperature freezers, people having the booster jabs are lumped together on certain days. This means that the number of vaccines needed for each of these days is fully calculated in advance. Hospitalisations Are the Key Figures The head of the infectious disease unit at the largest hospital in Barcelona has stated that the key numbers regarding the COVID-19 pandemic are the hospitalisations. He agrees that any rises in the numbers per 100,000 are a cause for concern, but on November 16th when there was a rise in cases, there were 2,180 patients in hospitals in Spain which was only 1.77% of all beds. Last January there were 31,000 people in hospitals and 5,000 in intensive care wards, but the current number was 427. In Andalucía on the same day, beds occupied in intensive care wards was less than 1%. He stated that non-vaccinated people were 4.5 times more likely to be admitted to hospital and on November 16th this worked out as being 77% of patients aged 30-39, and 78% aged 20-29. On November 18th in Almería province there were only 16 people in hospital with COVID-