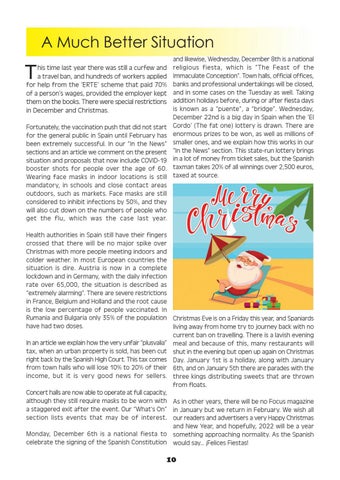 A Much Better Situation

his time last year there was still a curfew and a travel ban, and hundreds of workers applied for help from the ‘ERTE’ scheme that paid 70% of a person’s wages, provided the employer kept them on the books. There were special restrictions in December and Christmas. Fortunately, the vaccination push that did not start for the general public in Spain until February has been extremely successful. In our “In the News” sections and an article we comment on the present situation and proposals that now include COVID-19 booster shots for people over the age of 60. Wearing face masks in indoor locations is still mandatory, in schools and close contact areas outdoors, such as markets. Face masks are still considered to inhibit infections by 50%, and they will also cut down on the numbers of people who get the flu, which was the case last year.

and likewise, Wednesday, December 8th is a national religious fiesta, which is “The Feast of the Immaculate Conception”. Town halls, official offices, banks and professional undertakings will be closed, and in some cases on the Tuesday as well. Taking addition holidays before, during or after fiesta days is known as a “puente”, a “bridge”. Wednesday, December 22nd is a big day in Spain when the ‘El Gordo’ (The fat one) lottery is drawn. There are enormous prizes to be won, as well as millions of smaller ones, and we explain how this works in our “In the News” section. This state-run lottery brings in a lot of money from ticket sales, but the Spanish taxman takes 20% of all winnings over 2,500 euros, taxed at source.

Health authorities in Spain still have their fingers crossed that there will be no major spike over Christmas with more people meeting indoors and colder weather. In most European countries the situation is dire. Austria is now in a complete lockdown and in Germany, with the daily infection rate over 65,000, the situation is described as “extremely alarming”. There are severe restrictions in France, Belgium and Holland and the root cause is the low percentage of people vaccinated. In Rumania and Bulgaria only 35% of the population Christmas Eve is on a Friday this year, and Spaniards have had two doses. living away from home try to journey back with no current ban on travelling. There is a lavish evening In an article we explain how the very unfair “plusvalia” meal and because of this, many restaurants will tax, when an urban property is sold, has been cut shut in the evening but open up again on Christmas right back by the Spanish High Court. This tax comes Day. January 1st is a holiday, along with January from town halls who will lose 10% to 20% of their 6th, and on January 5th there are parades with the income, but it is very good news for sellers. three kings distributing sweets that are thrown from floats. Concert halls are now able to operate at full capacity, although they still require masks to be worn with As in other years, there will be no Focus magazine a staggered exit after the event. Our “What’s On” in January but we return in February. We wish all section lists events that may be of interest. our readers and advertisers a very Happy Christmas and New Year, and hopefully, 2022 will be a year Monday, December 6th is a national fiesta to something approaching normality. As the Spanish celebrate the signing of the Spanish Constitution would say... ¡Felices Fiestas!