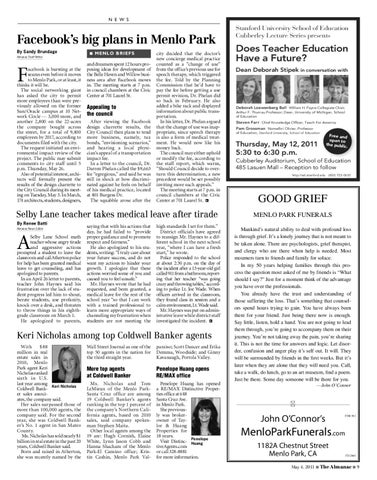 acebook is bursting at the seams even before it moves to Menlo Park, or at least, it thinks it will be. The social networking giant has asked the city to permit more employees than were previously allowed on the former Sun/Oracle campus at 10 Network Circle — 3,000 more, and another 2,800 on the 22-acres the company bought across the street, for a total of 9,400 employees by 2017, according to documents filed with the city. The request initiated an environmental impact review of the project. The public may submit comments to city staff until 5 p.m. Thursday, May 26. Also of potential interest, architects will formally present the results of the design charrette to the City Council during its meeting on Tuesday, May 3. In March, 174 architects, students, designers,

and dreamers spent 12 hours proposing ideas for development of the Belle Haven and Willow business area after Facebook moves in. The meeting starts at 7 p.m. in council chambers at the Civic Center at 701 Laurel St.

Appealing to the council After viewing the Facebook design charrette results, the City Council then plans to tend more business, namely, tax bonds, “envisioning scenarios,” and hearing a local physician’s appeal of a transportation impact fee. In a letter to the council, Dr. Darren Phelan called the $9,663 fee “egregious,” and said he was still in shock at how discriminated against he feels on behalf of his medical practice, located at 401 Burgess Dr. The squabble arose after the

city decided that the doctor’s new concierge medical practice counted as a “change of use” from the office’s previous use for speech therapy, which triggered the fee. Told by the Planning Commission that he’d have to pay the fee before getting a use permit revision, Dr. Phelan did so back in February. He also added a bike rack and displayed information about public transportation. In his letter, Dr. Phelan argued that the change of use was inappropriate, since speech therapy is also a form of medical treatment. He would now like his money back. The council may either uphold or modify the fee, according to the staff report, which warns, “Should Council decide to overturn this determination, a new precedent would be set possibly inviting more such appeals.” The meeting starts at 7 p.m. in council chambers at the Civic Center at 701 Laurel St. A

Selby Lane School math teacher whose angry tirade and aggressive actions prompted a student to leave the classroom and call Atherton police for help has been granted medical leave to get counseling, and has apologized to parents. In an April 26 letter to parents, teacher John Haynes said his frustration over the lack of student progress led him to shout, berate students, use profanity, knock over a desk, and threaten to throw things in his eighthgrade classroom on March 1. He apologized to parents,

saying that with his actions that day, he had failed to “provide proper guidance and to promote respect and fairness.” He also apologized to his students, writing: “I truly care about your future success, and do not want my actions to hinder your growth. I apologize that these actions worried some of you and caused you to feel unsafe.” Mr. Haynes wrote that he had requested, and been granted, a medical leave for the rest of the school year “so that I can work with a trained professional to learn more appropriate ways of channeling my frustration when students are not meeting the

high standards I set for them.” District officials have agreed to reassign Mr. Haynes to a different school in the next school year, “where I can have a fresh start,” he wrote. Police responded to the school at about 2:30 p.m. on the day of the incident after a 13-year-old girl called 911 from a bathroom, reporting that her teacher “was going crazy and throwing tables,” according to police Lt. Joe Wade. When officers arrived in the classroom, they found class in session and a calm environment, Lt. Wade said. Mr. Haynes was put on administrative leave while district staff investigated the incident. A

Wall Street Journal as one of the top 50 agents in the nation for the third straight year.

Does Teacher Education Have a Future? Dean Deborah Stipek in conversation with

Free and open to the public.

GOOD GRIEF MENLO PARK FUNERALS Mankind’s natural ability to deal with profound loss is through grief. It’s a lonely journey that is not meant to be taken alone. There are psychologists, grief therapist, and clergy who are there when help is needed. Most mourners turn to friends and family for solace. In my 50 years helping families through this process the question most asked of me by friends is “What should I say?” Just for a moment think of the advantage you have over the professionals. You already have the trust and understanding of those suffering the loss. That’s something that counselors spend hours trying to gain. You have always been there for your friend. Just being there now is enough. Say little, listen, hold a hand. You are not going to lead them through, you’re going to accompany them on their journey. You’re not taking away the pain, you’re sharing it. This is not the time for answers and logic. Let disorder, confusion and anger play it’s self out. It will. They will be surrounded by friends in the ﬁrst weeks. But it’s later when they are alone that they will need you. Call, take a walk, do lunch, go to an art museum, ﬁnd a poem. Just be there. Some day someone will be there for you. ––John O’Connor 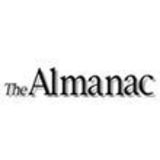