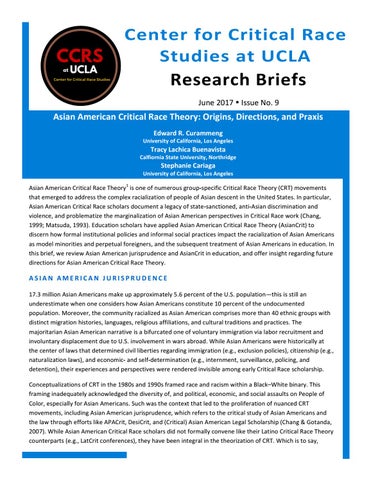 ASIAN AMERICAN JURISPRUDENCE 17.3 million Asian Americans make up approximately 5.6 percent of the U.S. population—this is still an underestimate when one considers how Asian Americans constitute 10 percent of the undocumented population. Moreover, the community racialized as Asian American comprises more than 40 ethnic groups with distinct migration histories, languages, religious affiliations, and cultural traditions and practices. The majoritarian Asian American narrative is a bifurcated one of voluntary immigration via labor recruitment and involuntary displacement due to U.S. involvement in wars abroad. While Asian Americans were historically at the center of laws that determined civil liberties regarding immigration (e.g., exclusion policies), citizenship (e.g., naturalization laws), and economic- and self-determination (e.g., internment, surveillance, policing, and detention), their experiences and perspectives were rendered invisible among early Critical Race scholarship. Conceptualizations of CRT in the 1980s and 1990s framed race and racism within a Black–White binary. This framing inadequately acknowledged the diversity of, and political, economic, and social assaults on People of Color, especially for Asian Americans. Such was the context that led to the proliferation of nuanced CRT movements, including Asian American jurisprudence, which refers to the critical study of Asian Americans and the law through efforts like APACrit, DesiCrit, and (Critical) Asian American Legal Scholarship (Chang &amp; Gotanda, 2007). While Asian American Critical Race scholars did not formally convene like their Latino Critical Race Theory counterparts (e.g., LatCrit conferences), they have been integral in the theorization of CRT. Which is to say, C C R S at U C L A

Asian Americans have been engaged in and have shaped the field of Critical Race studies since its inception. One of the first efforts to articulate an Asian American jurisprudence was Chang’s (1993) Asian American Legal Scholarship framework, in which he outlines a CRT-guided analysis that acknowledges historical and contemporary anti-Asian, nativist racist violence and discrimination; problematizes the racial positioning of Asian Americans as model minorities and their subsequent exclusion from that which constitutes People of Color; and emphasizes the role of experiential narratives to capture the complexity and material impact of racism against Asian American ethnic communities.

Asian American legal scholars also called for an analysis of the law’s role in perpetuating Asian American foreigner racialization, while also acknowledging diasporic and transnational experiences—the latter of which is obscured by the tendency of CRT scholars to frame analyses that center the U.S.

ASIANCRIT AND EDUCATION Education scholars have drawn upon Critical Race legal scholarship to illuminate the differential racialization between Asian Americans and other People of Color, among Asian American 2

ethnic groups (Buenavista, 2010; Teranishi, 2002). Further, education scholars have relied on the CRT tradition of counterstory to contextualize the educational experiences of underrepresented Asian Americans (Buenavista, Jayakumar, &amp; Mira-Escalante, 2009). Grounded in such work, Museus and Iftikar (2014) laid out the tenets of an AsianCrit Education framework, which guide scholars to center Asian American voices in Critical Race discourse and emphasize the utility and value of community-based praxis. Their tenets include: Asianization; Transnational Context; (Re)Constructive History; Strategic (Anti)Essentialism, Intersectionality; Story, Theory, and Praxis; and a Commitment to Social Justice. Collectively, these tenets highlight the importance of critically historicizing the racialized experiences of Asian Americans and the significant role advocacy can play in strategic organizing and movementbuilding around Asian American education. Taken together, Asian American Critical Race work in education continues to center experiential knowledge and examine issues of heterogeneity.

racist and xenophobic policies to control im/migration, and the ascendance of a political regime reified to protect whiteness characterize this moment and are precisely why critical strategies of resistance and praxis are needed, as well as the urgency for Critical Race scholars to revisit the fluid positioning of Asian Americans in the racial hierarchy. We propose three directions for Asian American Critical Race Theory to remain relevant and responsive to Asian American communities alongside all communities pursuant of struggles toward justice:

Necessity to Interrogate Asian American Complicity in Anti-Blackness Considering the invisibility of Asian American perspectives even in Critical Race scholarship, dismantling the model minority construct in education is an unavoidable project for scholars who are repeatedly charged by peer reviewers to historicize racialization in manuscripts considered for publication. While there are Asian American Critical Race efforts to be “post-model minority” (e.g., Poon et al., 2016), and work that examine how the internalization of the model minority perpetuates anti-Latinx sentiment (Buenavista, 2016), scholars must also interrogate how this specific racialization is grounded in anti-Black processes that facilitate racial divisiveness

A Focus on Asian Americans, (Settler) Colonialism, and Power A critique of the “perpetual foreigner” trope – Asian Americans, regardless of how many generations their families have lived in the U.S., are never viewed as fully “American”—is warranted, but the tendency to enact the notion of “Asian as immigrant” (Han, 2006) must simultaneously be problematized to account for the ways Asian Americans are affected by colonization and war more broadly. Yet, Asian Americans are also settlers and actively participate in settler colonialism— practices and discourses that occur at the expense of Indigenous peoples (Fujikane &amp; Okamura, 2008). Such considerations enable a nuanced understanding of how settler colonialism and other logics of power inhibit robust accounts of racialization.

Asian Americans and Ethnic Studies While CRT in the law and education assert a goal of social justice, scholars can better outline an Asian American Critical Race Praxis in education similar to how Yamamoto (1997) outlined in the context of political lawyering. Such a praxis can be developed 3

through a meaningful engagement with Ethnic Studies, in which scholars are tasked to rely on interdisciplinary perspectives to offer critical examinations of power and engage in resistance practices (Tintiangco-Cubales &amp; Curammeng, forthcoming). Ethnic Studies offers a productive site to examine interlocking systems of power like heteronormativity, sexism, transphobia, and ableism; and also necessarily engage with communities impacted by such systems to determine communityresponsive pedagogies. In order to foster transformative conditions toward racial and social justice for Asian Americans and other People of Color, Asian American Critical Race Theory in education requires a return to sustained studies of (Asian) American jurisprudence alongside Ethnic Studies praxis.

EDWARD R. CURAMMENG, is a Ph.D. Candidate in Education at the University of California, Los Angeles. In his research, he uses Critical Race Theory to examine the relationship between Education and Ethnic Studies for Students and Teachers of Color. At UCLA he is a Research Associate in the Institute for Immigration, Globalization, and Education with the National Commission on Asian American and Pacific Islander Research in Education. He currently is a part of the leadership with the People’s Education Movement – Los Angeles.

TRACY LACHICA BUENAVISTA, is a Professor in the Department of Asian American Studies and a core faculty member in the doctoral program in Educational Leadership at California State University, Northridge (CSUN). She uses Critical Race Theory to examine U.S. Pilipinx college access and retention, undocumented Asian student experiences, and the militarization of immigration reform. She is currently a fellow with the Asian American and Pacific Islander Research Coalition (ARC) and co-principal investigator for the CSUN DREAM Center.

STEPHANIE CARIAGA, is a Ph.D. Candidate in Education at the University of California, Los Angeles. She combines Critical Race Theory, critical literacy, and women of color feminist epistemologies to explore the development of healing pedagogies for and with Students of Color. She is also a founding member of the People’s Education Movement – Los Angeles, and continues to support its healing and wellness contingent that enacts self and collective care for teacher organizers.

MISSION STATEMENT The Center for Critical Race Studies at UCLA supports interdisciplinary, collaborative, and policy-oriented research on issues critical to Communities of Color.

This Brief Series was made possible in part through funding from the offices of the Dean of the Graduate School of Education and Information Studies (GSE&amp;IS). For more information please visit us at www.ccrs.ucla.gseis.edu