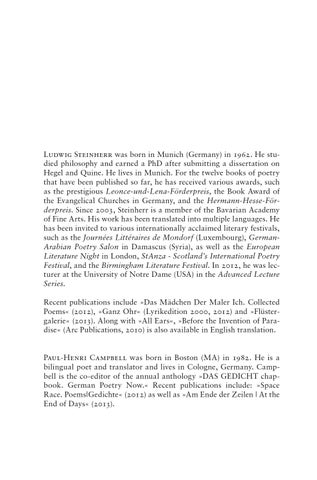 Ludwig Steinherr was born in Munich (Germany) in 1962. He studied philosophy and earned a PhD after submitting a dissertation on Hegel and Quine. He lives in Munich. For the twelve books of poetry that have been published so far, he has received various awards, such as the prestigious Leonce-und-Lena-Förderpreis, the Book Award of the Evangelical Churches in Germany, and the Hermann-Hesse-Förderpreis. Since 2003, Steinherr is a member of the Bavarian Academy of Fine Arts. His work has been translated into multiple languages. He has been invited to various internationally acclaimed literary festivals, such as the Journées Littéraires de Mondorf (Luxembourg), GermanArabian Poetry Salon in Damascus (Syria), as well as the European Literature Night in London, StAnza - Scotland’s International Poetry Festival, and the Birmingham Literature Festival. In 2012, he was lecturer at the University of Notre Dame (USA) in the Advanced Lecture Series. Recent publications include »Das Mädchen Der Maler Ich. Collected Poems« (2012), »Ganz Ohr« (Lyrikedition 2000, 2012) and »Flüstergalerie« (2013). Along with »All Ears«, »Before the Invention of Paradise« (Arc Publications, 2010) is also available in English translation. Paul-Henri Campbell was born in Boston (MA) in 1982. He is a bilingual poet and translator and lives in Cologne, Germany. Campbell is the co-editor of the annual anthology »DAS GEDICHT chapbook. German Poetry Now.« Recent publications include: »Space Race. Poems|Gedichte« (2012) as well as »Am Ende der Zeilen | At the End of Days« (2013).