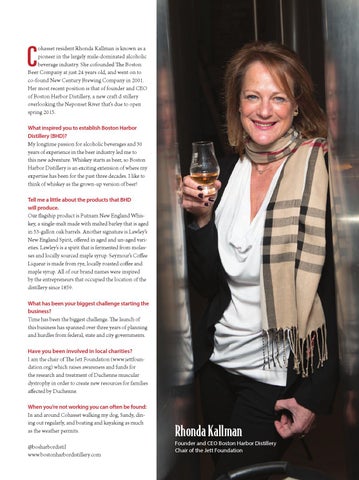 ohasset resident Rhonda Kallman is known as a pioneer in the largely male-dominated alcoholic beverage industry. She cofounded The Boston Beer Company at just 24 years old, and went on to co-found New Century Brewing Company in 2001. Her most recent position is that of founder and CEO of Boston Harbor Distillery, a new craft d stillery overlooking the Neponset River that’s due to open spring 2015. What inspired you to establish Boston Harbor Distillery (BHD)? My longtime passion for alcoholic beverages and 30 years of experience in the beer industry led me to this new adventure. Whiskey starts as beer, so Boston Harbor Distillery is an exciting extension of where my expertise has been for the past three decades. I like to think of whiskey as the grown-up version of beer!

Tell me a little about the products that BHD will produce. Our flagship product is Putnam New England Whiskey, a single-malt made with malted barley that is aged in 53-gallon oak barrels. Another signature is Lawley’s New England Spirit, offered in aged and un-aged varieties. Lawley’s is a spirit that is fermented from molasses and locally sourced maple syrup. Seymour’s Coffee Liqueur is made from rye, locally roasted coffee and maple syrup. All of our brand names were inspired by the entrepreneurs that occupied the location of the distillery since 1859. What has been your biggest challenge starting the business? Time has been the biggest challenge. The launch of this business has spanned over three years of planning and hurdles from federal, state and city governments. Have you been involved in local charities? I am the chair of The Jett Foundation (www.jettfoundation.org) which raises awareness and funds for the research and treatment of Duchenne muscular dystrophy in order to create new resources for families affected by Duchenne. When you’re not working you can often be found: In and around Cohasset walking my dog, Sandy, dining out regularly, and boating and kayaking as much as the weather permits. @bosharbordistil www.bostonharbordistillery.com