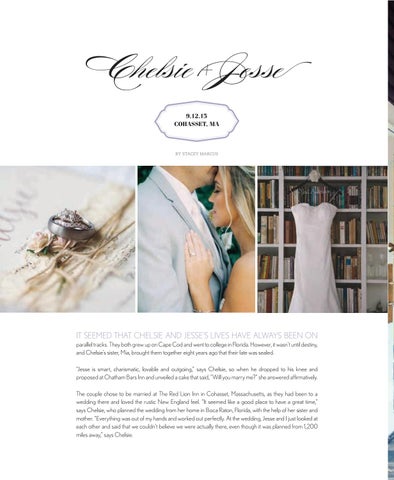 IT SEEMED THAT CHELSIE AND JESSE’S LIVES HAVE ALWAYS BEEN ON parallel tracks. They both grew up on Cape Cod and went to college in Florida. However, it wasn’t until destiny, and Chelsie’s sister, Mia, brought them together eight years ago that their fate was sealed. “Jesse is smart, charismatic, lovable and outgoing,” says Chelsie, so when he dropped to his knee and proposed at Chatham Bars Inn and unveiled a cake that said, ”Will you marry me?” she answered affirmatively. The couple chose to be married at The Red Lion Inn in Cohasset, Massachusetts, as they had been to a wedding there and loved the rustic New England feel. “It seemed like a good place to have a great time,” says Chelsie, who planned the wedding from her home in Boca Raton, Florida, with the help of her sister and mother. “Everything was out of my hands and worked out perfectly. At the wedding, Jesse and I just looked at each other and said that we couldn’t believe we were actually there, even though it was planned from 1,200 miles away,” says Chelsie.

Ask any bride-to-be where to go for the most comprehensive info on every aspect of wedding planning and they'll likely tell you Southern New England Weddings. This magazine has been publishing for nearly two decades and has won multiple regional awards. We've kept the dimensions on this one a little smaller than many traditional glossy magazines, so it's perfect for brides to take along as they plan their big day, but at 450-plus pages featuring dozens of real weddings and a variety of stories geared toward getting things done right, this book is big on inspiration and beautifully done.